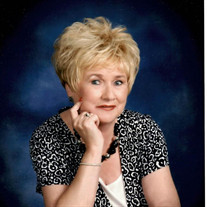 Alice May Schmidt, lovingly referred to as“Bubsie” by her husband, went home to the Lord Jesus on August 29th 2021. She was born to her namesake Alice “Nanny” Crickmore in the coastal town of Great Yarmouth, England, (Great Britain) on February 3rd, 1941 during World War II. From an early age it was clear she had a sharp mind and a quick wit. Alice was an avid reader, and she would often be found by her mom hiding in a cupboard with a good book. “Ally,” as her siblings and friends called her, was forced to grow up quick and learned to be self reliant from an early age, given that she was born 9th of 10 children to a single mother. Alice went to work in the factories at the age of 12 to help the family make ends meet. On February 12, 1959, at the age of 18, Alice left England, and came over to the United States. Alice moved to Limestone, Maine. On August 11, 1961, Alice gave birth to her beautiful daughter Melody May Blythe. In 1963, Alice and Melody moved to Jacksonville, Arkansas. When Alice moved to Arkansas, she enrolled at Draughon Business College and earned a degree in business. She also joined the “English Wive’s Club” and went on to serve as the club’s president. From 1970 to 2002, Alice grew a child care business that included 12 child care centers in Arkansas and Texas with her flagship school being Royal Academy (formerly Ding Dong Kampus), located in Jacksonville, Arkansas. She also helped launch a children’s summer program at Camp Quapaw. During the course of her career, she touched the lives of 1000s of children and 1000s of parents. In 2002, Alice retired from the day care business. After retiring, she never was one to sit around, so she went to work at Paul Sr.’s law practice where she enjoyed answering the phone. She loved interacting with the clients, but jokingly, complained about the pay. On February 12, 1977, Alice married the love of her life, Paul Sr. and they built a life together in Cabot, Arkansas. From their marriage, they had two sons, Paul Schmidt, Jr. and William P. Schmidt. Alice was diligent and industrious in successfully running her business and also running the house. Alice insisted the house always be kept clean and in perfect order. Eating together as a family at the dinner table was very important to Alice, and Paul Sr. knew he had better be home and ready for dinner at 6:00 PM. Alice was a great cook, and she was famous for her sausage rolls, minced meat pies, and apple pies with home made pie crusts. Alice always made sure that Paul Sr. always had his laundry done and his shirts starched and ready for court. Much to Paul Sr.’s chagrin, Alice never let the boys go without, and the boys knew that if they wanted something all they had to do was convince their Mom they needed it. Since Alice had grown up poor, she made it a point to teach her children and others the importance of being generous. Also, she made it a point to teach her children to be respectful of others and not to judge others by what they have or don’t have, but by their character. When Alice was not working she enjoyed reading, traveling (especially to the beach), and spending time with her family. Alice was a charter member of Our Savior Lutheran Church in Cabot, Arkansas. Along the way, Alice made many life long friends including: Joan Ryan, Cheryl Fugatt, Debbie Kitchens, Cathy Paris, Arlene Thomas, Mary Barger, Inez Sims, Donna Davis, and many many more. Alice was a loving friend, sister, wife, mother, grandmother, and great grandmother who will be dearly missed by all. Alice is predeceased by her parents Alice May Crickmore and Jimmy Crickmore. She is also predeceased by her siblings including: Eugene King, Eddie King, Nora Barron, Barry Crickmore, Betty Johnston, Collin Crickmore, and Anthony Crickmore. Alice is survived by her loving and devoted husband of 44 years, Paul Schmidt, Sr. She is also survived by two of her loving sisters Shirley Hunt and Diane Philpott. Further, she is also survived by her children, Melody May Blythe (Tony); Barry Evan Schmidt (Pennie); Pandra L. Bridges (Brian); Paul A. Schmidt, Jr. (Bridget) and William P. Schmidt (Heather). She is also survived by 10 grandchildren including: Jennifer Hettiarachchy (John); Daniel Blythe (Felicia); Michael Blythe (Christen); Kaleb Schmidt; Evan Bridges; Presley Schmidt; Brielle Schmidt; William Schmidt; Paisley Schmidt and Pierce Schmidt. She is also survived by 8 great grandchildren including: Haven, Garrett, Peyton, Colton, Ayden, Stella, James and Vivian. She is also survived by a host of nieces, nephews and cousins. A visitation will be held on Friday, September 3rd from 10:00 AM 11:00 AM with a Celebration of Life to follow at 11:00 AM in Hunt Chapel on the grounds of Pinnacle Memorial Gardens. Burial will follow at Pinnacle Memorial Gardens in Rogers. In lieu of flowers, donations can be made to the Circle of Life Hospice; 901 Jones Road in Springdale, Arkansas 72762. Their website is nwacircleoflife.com and their phone number is (479)750-6632. The family would like to take this opportunity to thank the team at Circle of Life for the wonderful care and compassion they showed Alice during her time with them. Following the service, the family will be hosting a lunch and reception for friends and family. To sign the online guest book please visit www.bernafuneralhomes.com

The family of Alice May Schmidt created this Life Tributes page to make it easy to share your memories.

Alice May Schmidt, lovingly referred to as“Bubsie” by her husband,...

Send flowers to the Schmidt family.