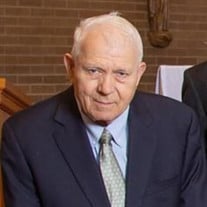 Andrew J. “Andy” Lucas, Jr. passed away on March 15, 2021. He was born November 30, 1929 in North Little Rock to Marie and Andrew Lucas, Sr. Andy graduated from Little Rock Catholic High School in 1948, enlisted in the U.S. Army and served in the Korean War with the 96th Field Artillery Regiment, 25th Infantry Division as a field artillery forward observer and communications sergeant. After his return to the States, he enrolled at the University of Arkansas where he met Shirley, the woman who would become his wife for over 60 years. He also enlisted in the Arkansas National Guard and was part of the forces federalized by President Eisenhower to assist in the integration of Central High School. After college he took a job with Gulf Oil Company as the editor of “The Orange Disc,” the company’s stockholders’ publication. In 1960, he returned to Arkansas where he accepted a position at the University of Arkansas Alumni Association. He was the Editor of Alumni Publications for over 27 years. He served as Acting Executive Director from 1987-1988 and Assistant Executive Director from 1988-1991. Upon his retirement, he was awarded the Alumni Community Service Award which now bears his name. As huge Razorback fans, Andy and Shirley could be found supporting the Hogs at all football, basketball, and baseball games. Andy was an avid runner and one of the founders of the Hogeye Marathon. Andy was a devout Catholic who gave without reserve to the St. Thomas and St. Joseph Catholic communities. He spent many hours volunteering for fundraising events such as the St. Thomas Phone-a-thon, and he assisted with Pre-Cana and RCIA classes at St. Joseph. Andy and Shirley were awarded the Papal Benemerenti Honor in 2003 from Pope John Paul II for “A Lifetime of Service to the Catholic Church and Family.” Andy is preceded in death by his wife Shirley (née Stanberry); his brother James Lucas; sisters Rose Marie Dozier and Mary Ann Lucas; and grandson Will Lucas. He is survived by a sister, Rita Gibbs; his children: Andy (Carla), Ernie (Carole), John (Coleen), Cathy (Jim Spalding), and Tom (Sara), as well as eight grandchildren, and one great-grandson. A rosary will be recited at 7:00 pm, Thursday March 18th at St. Joseph Catholic Church in Fayetteville with a visitation to follow until 8:00 pm. A Funeral Mass will be held Friday, March 19th at 1:30 pm at St. Joseph Church with private family burial to follow at St. Joseph Cemetery. If you plan to attend, please follow all Covid protocols including wearing masks at all times. If you are unable to attend, please feel free to watch the service via https://m.facebook.com/saintjosephfayetteville/ In lieu of flowers, donations may be made to St. Joseph Catholic School or to The St. Thomas Annual Fund.

The family of Andrew J. "Andy" Lucas created this Life Tributes page to make it easy to share your memories.

Send flowers to the Lucas family.