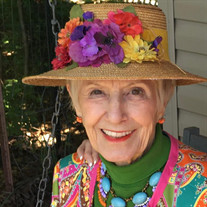 Our beloved mother, Anne Dougan Hanna-Newell, went to her heavenly home on July 14, 2021, after a sudden decline due to a chronic lung disease that hadn’t slowed her down a bit until last Tuesday. She died peacefully at Willard Walker Hospice House surrounded by her loving family and friends. She was born on August 25, 1933, in Little Rock, Arkansas, to Marie Rayburn Dougan and Thomas Burton Dougan. She graduated from Little Rock High School in 1950 where she was a cheerleader and member of A capella choir, and then went to Hendrix for a year. She transferred to the University of Arkansas in Fayetteville in 1952 where she pledged Zeta Tau Alpha Sorority and met and fell in love with Fred Hanna. They eloped on February 12, 1954, and she lived in the Zeta house until they found out that she had married and she had to move out. After Fred’s graduation from the UofA, they moved to Great Lakes, Illinois, where he was stationed in the Navy. They returned to Fayetteville in 1956, and made it their permanent home. Fred opened Hanna Marine and Anne took care of the home. Her greatest desire was to be a wife and mother, so together they had and raised 5 children, all of whom she loved fiercely. She thought gathering at the table each night was so important, and set a lovely table and made each child feel special. She believed it was being together that mattered, not the food, so we loved to tease her about her cooking method: if it’s smoking it’s cooking, if it’s black it’s done. Anne went on to receive her Bachelor’s Degree in Education, majoring in English, in 1967. She did have various hobbies, among them collecting dolls and participating in a doll club for years. After she became a Christian in 1968, she participated in many Bible Studies and prayer groups. Later in life, she enjoyed being the First Lady of Fayetteville from 1992-2000, during Fred’s tenure as Mayor. They were married happily for 50 years and enjoyed living part time on Beaver Lake. Anne’s joy was her family and her greatest desire was to share her faith in Jesus Christ and His plan for salvation. Anyone who met her, including the staff at WRMC, felt blessed by the love of Christ she exuded. She impacted the lives of so many and was a prayer warrior. Her last prayer request to her prayer group, God’s Girls, was that God either let her go to her earthly home or to her heavenly home. Anne truly lived by the scripture,” For to me, to live is Christ, to die is gain.” Philippians 1:21. Anne was preceded in death by her parents, her first husband, Fred Hanna, and her brother, Charles Rayburn Dougan. She is survived by her loving husband of 15 years, Mike Newell. Mike and Fred were childhood friends in Morrilton, AR, and Anne and Mike began a new life together after they both lost their spouses. They married in November of 2005 and lived happily together, truly in love, and we got the gift of a second father. She also leaves behind daughter Stephanie (Doug) Bryant, of Bentonville; Mark (Carol) Hanna, of Centerton; Thad (Anita) Hanna, Burt Hanna(Carrie), and Brown (Erica) Hanna, all of Fayetteville. Grandchildren: Ashley (Rocky) Morgan, Dr. Blake (Hannah) Bryant, Cole (Sara) Bryant, Hanna (Brett) Mann, Lauren (Chase) Johnson, Sarah (Anthony) Feng, Trey (Sela) Hanna, Trent (Kaylan) Hanna, Hayley (Toby) Baker, Jake (Nicole) Hanna, Brooke (Ryan) Lemoine, John and Leighanne Hanna. She leaves behind a legacy of 32; 5 children, 13 grandchildren, and 14 great grandchildren, with more to come. Visitation will be Monday, July 19, at Nelson-Berna Funeral Home in Fayetteville from 5:00-7:00 p.m. Celebration of Life service will be Tuesday, July 20, at 10:00 a.m. Trinity Fellowship, Fayetteville. Memorials may be made to Mount Comfort Cemetery Association, 3878 W. Mt. Comfort Rd., Fayetteville, AR 72704 To sign the online guest book, please visit www.bernafuneralhomes.com

Our beloved mother, Anne Dougan Hanna-Newell, went to her heavenly home on July 14, 2021, after a sudden decline due to a chronic lung disease that hadn&#8217;t slowed her down a bit until last Tuesday. She died peacefully at Willard Walker... View Obituary & Service Information

The family of Anne Dougan Hanna-Newell created this Life Tributes page to make it easy to share your memories.

Our beloved mother, Anne Dougan Hanna-Newell, went to her heavenly...

Send flowers to the Hanna-Newell family.