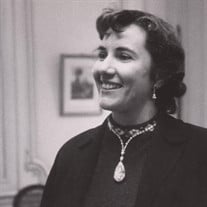 B. Jean Strong lived a full and amazing life of 95 years 311 days until her death on May 26, 2021. She was born to Walter and Thelma Strong on the family farm near Marion, Iowa. Her grandfather encouraged her involvement in the life around her, giving her a nickel as part of the hay crew to handle the horse that hoisted bales to the barn loft. Jean attended a one room school where she learned to lead, listening to the older kids, caring for the little ones, helping the struggling. She made friends there she loved for life. Jean worked her way through the University of Iowa running a weekly newspaper as editor, reporter, and photographer, as well as running the linotype. She still had time for student government. As a journalist she went from The Cedar Rapids Gazette to The Farm Journal working with extraordinary mentors who recommended her to Life and Fortune magazines. At Life she worked with Alfred “Eisey” Eisenstadt; helped Margaret Bourke White catalogue her famous photos. Jean remembered staying up all night writing captions for photos so the Life team could get their rolls of film out of Cuba. Castro was in the hills ready to enter Havana. After assignment on Princess Margaret’s trip to the Bahamas, she received a personal letter from Margaret’s lady in waiting for her kindness in sharing photos. Margaret was an aspiring photographer herself. Harry Winston placed the world’s largest diamond on Jean’s neck after Life recorded it for its audience. Though the photo was not for the magazine, she kept the picture. Her nephew Mark remembers she gave him a lifelong love of reading. She sent Life to the farm in Marion where he poured over the pictures and stories like many kids did in the fifties. He says she opened the world to him. Jean kept extensive scrapbooks with photos and typed captions and stories. Each book was a personal Life magazine shared with her mother and family. They are now at the University of Iowa. Thelma Strong accompanied Jean on several research trips for Life books on New England and the West. Jean memorialized their trip by donkey into Grand Canyon in one of her own books, Never Say Never. People liked to talk to Jean, a wonderful gift journalists of that era shared and valued. People realized she was one of them and cared for them and their stories. In an age when many like to claim they are the first to do this or that, Jean and her generation of women really were first. Discrimination against women was unremarked, overcome in everyday ways without much notice, part of life. Without anger or resentment, they prevailed, finding many successes. Never a victim, Jean said, “I was not responsible for what was, I was responsible for myself.” She became a minor member of a class action suit against Voice of America, a radio network reaching out to the world for the United States. They refused to hire women. Her name was found in the record of those refused, but long before that she had moved on. Years later the suit was won with satisfying settlements. Jean bought her first home and an RV and traveled; then sold them both, planned her care, and invested in the lives of friends, relatives, and charities. B. Jean Strong is survived by many fortunate nieces and nephews and friends, young and old, whom she nurtured and encouraged in their own journeys. Kindness was her nature, her way.

B. Jean Strong lived a full and amazing life of 95 years 311 days until her death on May 26, 2021. She was born to Walter and Thelma Strong on the family farm near Marion, Iowa. Her grandfather encouraged her involvement in the life around... View Obituary & Service Information

The family of B. Jean Strong created this Life Tributes page to make it easy to share your memories.

Send flowers to the Strong family.