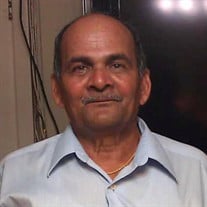 Babubhai Bhakta, age 76, of Poteau, Oklahoma, passed from this life Wednesday, March 2, 2022. He was born February 14, 1946, in India. His parents were Bhulabhai Bhakta and Ramiben Bhakta. Survivors are his wife, Gulabben Bhakta; daughter, Rashmita Patel and son-in-law, Jayesh Patel; daughter, Asha Desai and son-in-law, Mahesh Desai; son, Pankaj Bhakta and daughter-in-law, Reshma Bhakta; six grandchildren, Jeels, Dhruvi, Raj, Nikunj, Vanessa, and Aman. Funeral service will be held 10:00 a.m. March 11, 2022, at Nelson Berna Funeral Home in Fayetteville. Prathna will be held at Springdale Inn in the evening from 4-6pm March 11, 2022. Babubhai was born and raised in Dhaman, Gujarat. His work ethic was outstanding. Being raised in India, he started working at a young age as a farmer and making dessert as a business. His love for cricket was unreal. He watched cricket so much his tv was never turned off. His Sony TV did not turn off for 5 years. He brought his roots of farming from India to the US, continuing to distribute vegetables to his family and nearby friends. He always gave his vegetables away with a smile and always invited everyone back over to see how his vegetables were growing. We will miss him dearly and pray that his soul rests in peace.

The family of Babubhai Bhakta created this Life Tributes page to make it easy to share your memories.

Babubhai Bhakta, age 76, of Poteau, Oklahoma, passed from this...

Send flowers to the Bhakta family.