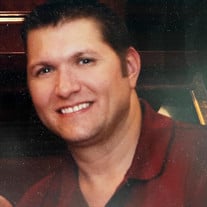 Benjamin Robert Bogle passed away peacefully surrounded by his family on Saturday, May 7, 2022. He is preceded in death by his grandparents Rev. Dr. Ben and Maxine Hines, Bob and Marilyn Bogle and his brother-in-law Joe Stinnett, Jr. Ben was born in Branson, Missouri on December 14, 1975, and in his early years loved to tell friends he was born at Silver Dollar City. But at 6 weeks old his family moved to Bentonville, Arkansas where he grew up in a small-town atmosphere. A place where, at the age of 6, he could get off the school bus halfway home so he could walk the rest of the way and explore the world. However, that soon came to an end when he was recognized and reported to his mother. After graduating from the University of Arkansas Ben moved to Ft. Walton Beach, Florida for his first job and a chance to ride out his first hurricane. On a trip between Bentonville and Florida he stopped at a friend’s home where he was introduced to Sarah Stinnett who quickly became the love of his life. After a move to Jacksonville, Florida for Sarah’s residency they settled in Collierville, Tennessee but the beaches of Florida kept calling. They moved on to Destin with their very spoiled and much-loved dog Sookie who loved to ride on their golf cart perched on Ben’s lap. Ben loved fishing, especially deep-sea fishing, and living in Destin gave him many excuses to go. He and Sarah enjoyed the beaches and could often be found there. Traveling was a passion and they loved planning trips. On special occasions they would surprise each other with an unknown destination and new adventures. He is survived by his wife Dr. Sarah Bogle of Destin, Florida; father David (Tina) Bogle; mother Susan (Pat) Kennedy; sister Erin (Jason) Easley; and aunts and uncles, David (Susan) Hines of Edmond, OK, Becky (Bob) Alexander, Ann (Jim) McKenzie; parents-in-law Joe and Mary Stinnett of Collierville, TN; sister-in-law Ping Stinnett of Collierville, TN; Nieces and Nephews, Lukas Easley of Gravette, Brittney Easley of Fayetteville, Halie (Hunter) Deaton of Gravette and Lydia Stinnett of Collierville, TN. A visitation will be held 10:00 a.m. – 11:00 a.m. Tuesday May 17, 2022, with funeral service beginning at 11:00 a.m. at First United Methodist Church in Bentonville, Arkansas. A private family burial will take place at Bentonville Cemetery under the direction of Nelson-Berna Funeral Home Rogers. In lieu of flowers memorials may be made to Havenwood 808 N. Main Street, Bentonville, Arkansas 72712

Benjamin Robert Bogle passed away peacefully surrounded by his family on Saturday, May 7, 2022. He is preceded in death by his grandparents Rev. Dr. Ben and Maxine Hines, Bob and Marilyn Bogle and his brother-in-law Joe Stinnett, Jr. Ben was... View Obituary & Service Information

The family of Benjamin Robert Bogle created this Life Tributes page to make it easy to share your memories.

Benjamin Robert Bogle passed away peacefully surrounded by his...

Send flowers to the Bogle family.