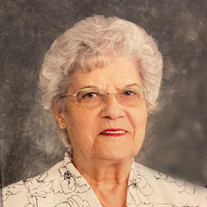 Beulah Louise Sooter Brown passed from this life to her eternal home on January 13, 2021 in Bentonville, Arkansas. She was born in Gravette, Arkansas on July 22, 1930 to Ova Bryan and Robbie Fern Allsbury Sooter. She moved from Gravette to Bentonville in 1939, where she attended Bentonville schools and graduated with the class of 1948. Beulah worked for Southwestern Bell company from 1948 to 1958, when they went dial. She also worked in the Walmart payroll department from 1972 until 1989. Beulah married Richard Lynn Brown, Jr. on May 9, 1953 and lived in Vaughn, Arkansas until 2002, when they moved to Bella Vista, Arkansas. She was a member of the Bentonville Community Church of the Nazarene and also attended the Vaughn Presbyterian Church all of her married life. The Vaughn community and the church were an important part of her life. She was preceded in death by her parents, Ova Bryan and Robbie Fern Sooter, sisters Opal Marie Sooter, Ellen Mae Jefferson and husband Joe, brothers John Berry Sooter (aka J.B.), Charles Wayne Sooter and Kenneth Eugene Sooter and wife Mary Ruth. She is survived by her husband of 67 years, Richard Lynn Brown, Jr., one daughter Sonja Brown Tate and husband Dwayne, and two sons Jerry Lee Brown and wife Sandy and David Eugene Brown and wife Laura. She also is survived by four granddaughters, Holly Tate Johnson and husband Kurt, Katie Tate McCullock and husband Josh, Haley Brown Neil and husband Brandon, Carly Brown and fiancé Blake Eby and 6 great grandchildren. In addition, she is survived by one sister, Helen Ruth Sooter Miller and one sister-in-law, Ozell Sooter and a host of nieces and nephews. Graveside services will be held at Barron Cemetery in Vaughn, Arkansas on Saturday, January 16th. In lieu of flowers, donations may be made to Circle of Life, 1201 NE Legacy Parkway, Bentonville, AR 72712 or online at www.givetocircle.org

Beulah Louise Sooter Brown passed from this life to her eternal home on January 13, 2021 in Bentonville, Arkansas. She was born in Gravette, Arkansas on July 22, 1930 to Ova Bryan and Robbie Fern Allsbury Sooter. She moved from Gravette to Bentonville... View Obituary & Service Information

The family of Beulah Louise Sooter Brown created this Life Tributes page to make it easy to share your memories.

Beulah Louise Sooter Brown passed from this life to her eternal...

Send flowers to the Brown family.