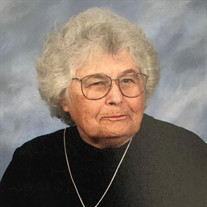 Billie Louise Baker Carnes, 91, of Farmington, Arkansas went to be with the Lord on February 13, 2021, just 3 days short of her 92nd birthday. A child of the Great Depression she was born on February 16, 1929, in Springdale, Arkansas. She was a graduating member of the Springdale High School class of 1946. She went on to be a lab chemist at Welch’s for 38 years. Billie was the daughter of Thomas Charles Baker and Mattie Lois Stamps Baker. She was the youngest of nine children. She was preceded in death by her parents and sisters, Ruth Baker Fletcher, Ruby Baker High, Kate Baker Justice, Dorothy Baker and brothers Clacy K. Baker, Cranel “Doc” Baker, Joe Baker, and Thomas Charles Baker Jr. Billie was married to Aldon Haskel Carnes for 45 years. Her husband proceeded her in death on December 22, 1998. She was a loving wife and mother. She is survived by her son, Larry Wayne Carnes of North Little Rock; her daughter, Barbara Carnes Lorenz and husband Gus Lorenz of Greenbrier; her three grandchildren, Lindsay Carnes Karnes and husband Whitney “Whit” Karnes of Fayetteville, Stephen Carnes of North Little Rock, and Bradley Lorenz of Farmington; and three great-grandchildren. She was a gifted poet and writer and a voracious reader. Had she been able to continue her education beyond high school, she would have undoubtedly made an excellent teacher. She was a devout Christian and could recall scripture better than most biblical scholars. She was generous, kind, and slow to give advice. She always had a smile on her face. She never complained and never had a bad thing to say about anyone. She had an insatiable sweet tooth, and was always armed with miniature Hershey’s candy bars and Werther’s candies in her pocket. She wasn’t one who cherished frilly gifts, but always loved getting chocolates. In addition, she was a terrific cook. Her dressing was a mainstay at Thanksgiving and Christmas dinners, and her strawberry pie and banana pudding were unrivaled. She will be forever missed. Billie’s family would like to extend a special thank you to all her caregivers and Hospice Home Care. A funeral service will be held at 10:00am on Saturday, February 20, 2021, in the chapel of Nelson-Berna Funeral Home in Fayetteville. Interment will follow at Friendship Cemetery in Springdale. In lieu of flowers, memorial donations may be made to St. Jude Children’s Hospital at https://www.stjude.org/ or mailing to 262 Danny Thomas Place, Memphis, TN, 38105, or the Down Syndrome Connection of Northwest Arkansas Center for Nonprofits at St. Mary’s at https://dscnwa.com/who-we-are/contact.html or mailing to 1200 W. Walnut Street, Suite 1407, Rogers, AR 72756. https://my.gather.app/remember/billie-carnes

Billie Louise Baker Carnes, 91, of Farmington, Arkansas went to be with the Lord on February 13, 2021, just 3 days short of her 92nd birthday. A child of the Great Depression she was born on February 16, 1929, in Springdale, Arkansas. She... View Obituary & Service Information

The family of Billie Louise Baker Carnes created this Life Tributes page to make it easy to share your memories.