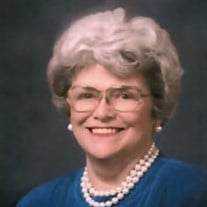 Boyce Woollard Morgan Billingsley passed away at her home in Bentonville, Arkansas on Thursday, March 18, 2021. She was born on October 27, 1931 in Memphis, Tennessee to Mildred Borum and DB Woollard, Jr. The first year of her life was spent in Memphis and then the family moved to West Memphis, Arkansas. When she was five years old, her father, DB Woollard, Jr. drowned while on a fishing trip. Her mother, Mildred Woollard, elected to stay in West Memphis and was appointed Postmistress of the West Memphis Post Office. Mrs. Woollard later married John A. Cooper, Sr and the family remained in West Memphis where Boyce attended and graduated from West Memphis High School. She then attended the University of Arkansas in Fayetteville and graduated in 1955. Her first marriage to Charles Morgan Jr. ended in divorce. Boyce and her son Chuck moved to Cherokee Village, Arkansas where her family had started a small real estate development named Cherokee Village Development Company. Having received her college degree in Finance, Boyce worked in the business office there to support herself and her son. The family company was later Named the John A Cooper Company and is now known as Cooper Communities, Inc. In 1959, Boyce married George M. Billingsley of Memphis and Cherokee Village. He had served four years in the Navy, returned to the University of Arkansas to finish his degree, and then moved to Cherokee Village and joined the salesforce of the family real estate company. They had two daughters, Boyce Ann and Kelly. In 1965, the family moved to Bella Vista, Arkansas to help start Bella Vista Village. They led an active social life and more involved in community service. The Billingsley‘s supported the Bentonville School System and the Bentonville-Bella Vista Boys and Girls club. Mrs. Billingsley served on the Bentonville School Board for ten years and served as a Girl Scout Neighborhood Chairman for several years. She was on the Board of Directors of the Mildred Borum Chapel in Bella Vista. She was also a charter member of the Bella Vista First United Methodist Church as well as the Cherokee Village First United Methodist Church. She was supportive of the Arts, serving as Board member on the Walton Arts Center in Fayetteville. Boyce and George were generous supporters of the University of Arkansas, both serving on the campaign for the 21st-century Steering Committee, which achieved the University of Arkansas’s first billion dollar funding. Together they received the Arkansas Razorback Foundation Distinguished Service Award and the Chancellors Medal in 2005. She is preceded in death by her husband of 43 years, George Billingsley, and her parents, DB Woollard Jr and Mildred Borum Cooper and her stepfather, John A. Cooper, Sr; also her brother, John A. Cooper, Jr and her sister, Ann Woollard Basore. She is survived by one son, Charles W Morgan III (Chuck) of Boca Raton, Florida and two daughters Boyce Ann Billingsley Of Hudson, New York and Kelly Billingsley Jones (Wade) A Bentonville, Arkansas, and two grandchildren, George Wolfram and Rebecca Wolfram of Hudson, New York and one sister, Rebecca Cooper Whelan of Hot Springs, Arkansas. Her caregivers in her later life who took exceptional care of her, Dario Amini, Linda Soboj, Mary Hanson, and Misty Hooper remain in the families gratitude. In lieu of flowers, please send memorials to the Northwest Arkansas children’s shelter, 860 NW. Vaughn Rd., Bentonville, AR 72713. Arrangements have been interested in the care of Nelson-Berna Funeral Home in Rogers, Arkansas.

Boyce Woollard Morgan Billingsley passed away at her home in Bentonville, Arkansas on Thursday, March 18, 2021. She was born on October 27, 1931 in Memphis, Tennessee to Mildred Borum and DB Woollard, Jr. The first year of her life was spent... View Obituary & Service Information

The family of Boyce Woollard Morgan Billingsley created this Life Tributes page to make it easy to share your memories.

Boyce Woollard Morgan Billingsley passed away at her home in...

Send flowers to the Billingsley family.