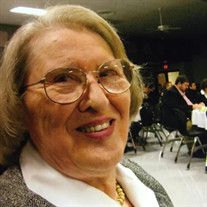 Mary Carolyn Blanks Park, of Fayetteville died December 30, 2021 at Butterfield Trail Village in Fayetteville, where she had resided for the last 10 years. Carolyn was born in Little Rock, Arkansas on October 21, 1931. She was the oldest child of Lane William Blanks and Irma Herron Blanks. The family moved to Hamburg, Arkansas and Carolyn was a graduate of Hamburg High School. She attended the University of Arkansas, earning a BA and MA in History. She was a member of the Zeta Tau Alpha Sorority. She married James Marvin Park of Cabot, Arkansas on February 22, 1953. Following J.M.’s military service, the couple settled in Cabot and were parents to three daughters, Susan, Holly and Allison. Carolyn was a homemaker with a passion for Church and Community Service. In her local church she sat on committees, taught Sunday School to many ages, and volunteered in any way that she felt would make Cabot United Methodist more welcoming to those in need of a spiritual home. Her long-time adult Sunday School class publicly named itself The Seekers, but privately joked that they should be called The Heretics. She spent endless hours on United Methodist boards at the local, district, and conference levels. She trained as a Lay Speaker and spent several years as a visiting preacher for United Methodist churches in communities too small to support a full-time minister. She was the first Laywoman to serve on the Arkansas Methodist Board of Ordained Ministries, which prepares ministerial candidates for ordination. One of her great joys was attending the Arkansas UMC’s Annual Conference as a representative of the Cabot church for over 20 years. She served on the Lonoke County Library Board, the Central Arkansas Mental Health Board, and the Cabot Scholarship Foundation Board which she helped found. She and J.M. were members of the Little Rock chapter of Parents and Friends of Lesbians and Gays (PFLAG) for many years. She was predeceased by her parents, her husband J.M. Park, and her sister Martha Blanks Benson. She is survived by her daughters Susan (Eric) Park Esche, Holly (Fran) Lane Park and Allison (Rupal) Bhatt-Park, grandsons James Eric Esche and Dante Bhatt-Park, and brother Greg P. Blanks. A memorial service will be held at Nelson Berna Funeral Home in Fayetteville on January 7 at 1 p.m. Interment of ashes will take place at Mt. Carmel Cemetery in Cabot, Arkansas on January 8 at 2 p.m. Arrangements by Nelson Berna Funeral Home. In lieu of flowers, contributions may be made to the Methodist Family Foundation, the Cabot Scholarship Foundation Inc,, general fund in memory of Carolyn Park, 133 North Candlewood, Cabot, AR, 72023, or the Butterfield Trail Village Foundation. The service will be livestreamed and available to view at https://my.gather.app/remember/carolyn-park

Mary Carolyn Blanks Park, of Fayetteville died December 30, 2021 at Butterfield Trail Village in Fayetteville, where she had resided for the last 10 years. Carolyn was born in Little Rock, Arkansas on October 21, 1931. She was the oldest child... View Obituary & Service Information

The family of Carolyn Blanks Park created this Life Tributes page to make it easy to share your memories.

Send flowers to the Park family.