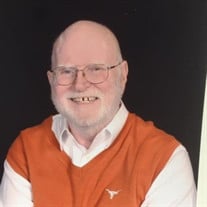 Charles Elmer (C.E.) Riggs, Jr. passed into the arms of Jesus on February 14, 2021, following a lengthy illness. He was born January 20, 1946, in Orange, Texas, to Nora McDonald and Charles E. Riggs. He graduated from Stark High School in Orange in 1964, having earned accolades as an All-District, All-State, and All-American defensive guard on the Tiger football team. He was recruited to play for the Texas Longhorns by Darrell Royal, and remained an ardent fan long after his playing days were over. In 1968 he married Susan Timm, whom he met at UT. They were married for over 52 years despite all of their parents’ disbelief that the marriage would succeed. In 1969 he graduated with a B.S. in Physical Education and began teaching and coaching at Stark High. Deciding that coaching wasn’t really his calling, he entered the Texas A&M Physical Education graduate program and received his M.S. and Ph.D., earning awards for excellence. Daughter Stephanie was born in 1975. Following a year of post-doctoral work at the University of California-Santa Barbara, the family moved to Tallahassee, where he began his collegiate career as an Assistant Professor at The Florida State University. Son Brendon was born shortly thereafter. After 6 years, with tenure and promotion accomplished, He accepted a position as the Director of the Human Performance Lab in the new HPER Building at the University of Arkansas. For the next 27 years he amassed an impressive resume, including awards for teaching, research, service, and his work with undergraduate research and Honors students. His research areas were based on medical and biological models, unusual for Exercise Physiology at the time. He made presentations and published his research widely and was in leadership positions in professional organizations. He was a Fellow of the American College of Sports Medicine as well. He collaborated in research with faculty members in departments across the UA campus and with faculty at other universities. He had leadership roles in the UA as a whole, serving as President of the Faculty Senate and the Chair of the Campus Faculty. His ability to lead efficient meetings was well known. His most cherished career endeavor was his sabbatical at the Mayo Foundation in Rochester, MN, in 1998, as a Visiting Scientist. Here he learned to clone his own tissue for use in research of fatty acid oxidation disorders, so that others would not have to undergo procedures to harvest it. His own research began to revolve around this topic in collaboration with other faculty and undergraduate and graduate students. His students considered him tough with high expectations. He was meticulous in his laboratory methodologies and expected the same from them. He enjoyed encouraging and mentoring them, as long as things were done his way. Many went on after graduation to become successful doctors, professors, physical therapists, business people, and more. Many have credited him with giving them the courage and knowledge to go forward with their career choices. While his career could be all-consuming, his first love was his family. He would not accept invitations to go anywhere on Sundays unless the children were included. He coached soccer and football, attended every recital and game, put up with his wife’s social events, and always loved returning to Orange for reunions with his large and colorful extended family. He was sweet, silly, smart, charming, and, when he wanted to be, pretty intimidating. He was known to break into dance in random public places to the delight of his children and the consternation of his wife. He loved Maui and had a wardrobe of Hawaiian shirts and an affinity for growing tropical plants. He was a lifelong Methodist and was active at Sequoyah United Methodist Church, leading and attending classes, and serving on committees and in leadership roles. He retired in 2011 as Professor Emeritus, and he and Susan traveled extensively to see friends and family in Texas, to attend Longhorn football games, and to their shared areas of origin Scotland, Ireland, and England. He enjoyed his grandchildren immensely, volunteering in schools, taking them on hikes and trips, and just being the “Papa” that they both adored. He was predeceased by his parents and his sister, Tanga Crews. He is survived by his wife Susan; children and their spouses, Stephanie and Michael Stephens and Brendon and Meredith Riggs; grandchildren Chloe and Christopher Krumwiede; 3 nieces; 2 great-nephews, 4 great-nieces, 1 great- great-nephew; brother-in-law Jimmy Crews; and a host of loving and boisterous cousins. A memorial service will be held July 21 at 1:30 p.m. at Sequoyah United Methodist Church in Fayetteville. Casual clothing is encouraged. The service will be live-streamed at sequmc.org on the You Tube channel. The family wishes to thank the medical facilities that have cared for and compassionately treated Charles in the past year: Butterfield Trail Village Health Care, Encompass, Washington Regional, and the Willard Walker Hospice House. They also extend a special thanks to Dr. James Norys, his longtime physician. In lieu of flowers, donations in his memory may be made to Sequoyah United Methodist Church, 1910 N. Old Wire Road, Fayetteville, AR 72703, or to St. Jude’s, 501 St. Jude Place, Memphis, TN 38105.

Charles Elmer (C.E.) Riggs, Jr. passed into the arms of Jesus on February 14, 2021, following a lengthy illness. He was born January 20, 1946, in Orange, Texas, to Nora McDonald and Charles E. Riggs. He graduated from Stark High School in Orange... View Obituary & Service Information

The family of Charles Elmer (C.E.) Riggs Jr. created this Life Tributes page to make it easy to share your memories.

Send flowers to the Riggs family.