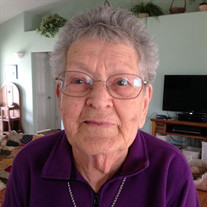 Cleo Collins Thurston Born - July 9, 1925 - Red Star, AR Died - September 24, 2021- Boise, ID Cleo was born the third child of twelve to W. H. and Rosie (Williams) Collins in Red Star, AR. Since Cleo was the oldest daughter, she had to drop out of school after third grade and help care for the younger children and take on a big share of the household tasks. Not being able to finish school remained a sorrow for her throughout her life. She met her future husband, Charles H. Thurston, when he came to ask her dad to preach a funeral. He saw her working in the corn field and was smitten. They married March 12, 1949. When their first child was an infant, they moved to Washington state where their other two children were born. They lived in Entiat, WA, until 1988 and then moved back to Arkansas to be closer to her aging parents. While in Entiat, both Chuck and Cleo worked many years on the Pine Tree Ranch, which raised apples, pears, cherries, and nectar-ines. After returning to Arkansas, Cleo worked several years at a pharmacy and then did quality control for Tyson. Cleo’s love language was food - if she liked you, she wanted to feed you, and she loved to cook for family and friends. She had a generous, sometimes fiery, spirit. She loved the Lord and served faithfully at Entiat Friends Church and then at Zion Christian Union in Fayetteville. She always ended visits with her nieces and nephews with “don’t forget to pray.” After Chuck died, she lived alone several years, and then began experiencing dementia and moved to Boise, ID, to live with her daughter. Cleo was preceded in death by her husband Chuck, her parents, and 4 siblings. She is survived by her children Harrison “Harry” (Yvonne) of Prairie Grove, AR, Lana of Boise, ID, and Michael of Wenatchee, WA; two granddaughters Lauren and Brianna; seven brothers and sisters; and numerous nieces and nephews. In lieu of flowers, friends are encouraged to make donations to Entiat Friends Church, P.O. Box 516, Entiat, WA 98822. Funeral services will be 10:00 a.m., Saturday, October 2, 2021, at Nelson Berna Funeral Home in Fayetteville, with burial to follow at Witter Cemetery in Witter, Arkansas. Visitation will be from 5:00 p.m. to 7:00 p.m., Friday, October 1, 2021, at Nelson Berna Funeral Home. The family requests that everyone wear their facemasks for the funeral service and visitation.

The family of Cleo Thurston created this Life Tributes page to make it easy to share your memories.

Send flowers to the Thurston family.