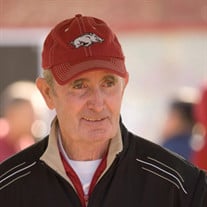 John McDonnell, the University of Arkansas legendary men’s cross country and track and field coach passed away Monday, June 7, 2021 at the age of 82. He was born July 2, 1938 in Crossmolina, Ireland to Michael McDonnell and Bridget (Hopkins) McDonnell. He was a member of St. Joseph Catholic Church in Tontitown, AR. Coach McDonnell established a legacy of success unrivaled in the history of NCAA athletics producing 42 NCAA championships, including five national triple crowns and 12 consecutive NCAA Indoor titles from 1984-95. McDonnell’s 42 national titles are more than any coach in any single-gender program in the history of collegiate athletics. He won 20 conference triple crowns, 34 consecutive cross country conference championships, including 17 straight in the Southeastern Conference, and earned 80 national and conference coach of the year awards in his 36-year hall of fame career with the Razorbacks. The United States Track and Field and Cross Country Coaches Association annually awards the John McDonnell Division I men’s program of the year in his honor. From County Mayo, Ireland, McDonnell became head cross country coach of the Razorbacks in 1972, and head track and field coach in 1977-78. His teams won 20 national championships in indoor track, 11 in outdoor track and 11 in cross country. Among McDonnell’s total of 83 conference titles, 45 were claimed in the SEC with 38 from the SWC. Razorback athletes earned 652 All-America honors during his coaching tenure. In addition to being inducted into numerous halls of fame, Arkansas’ outdoor facility is named John McDonnell Field and features a statue of him. He was preceded in death by his parents, two brothers, Patrick McDonnell and Leo McDonnell, and two sisters, Catherine McDonnell and Annie Griffin. He is survived by his wife of 54 years Ellen (Elias) McDonnell, one son Sean McDonnell of Fayetteville, AR, one daughter, Heather McDonnell Hastings and husband Jeffery of Fayetteville, AR, three sisters, Philomena Pena of Barcelona, Spain, Mary McDonnell and Margaret Carr both of Ballina, Ireland, one brother, Michael McDonnell and wife Jane of Edmond, OK, a sister in law, Una McDonnell of Crossmolina, Ireland and two grandchildren, Noah and Christopher Hastings. A rosary will be recited at 5:00 PM on Thursday, June 10that St. Joseph Catholic Church in Fayetteville with a visitation to follow starting at 5:30 PM until 7:00 PM. A Mass of Christian Burial will be held 10:00 AM on Friday, June 11th at St. Joseph Catholic Church in Fayetteville. If you are unable to attend you may view the service at the following link https://www.facebook.com/saintjosephfayetteville/live Burial will follow at Fairview Memorial Gardens. In lieu of flowers memorial contributions may be made to Alzheimer’s Association, c/o National Processing Center, Alzheimer’s Association PO Box 96011 Washington DC 20090-6011. To sign the online guest book please visit www.bernafuneralhomes.com

John McDonnell, the University of Arkansas legendary men&#8217;s cross country and track and field coach passed away Monday, June 7, 2021 at the age of 82. He was born July 2, 1938 in Crossmolina, Ireland to Michael McDonnell and Bridget (Hopkins)... View Obituary & Service Information

The family of Coach John McDonnell created this Life Tributes page to make it easy to share your memories.

Send flowers to the McDonnell family.