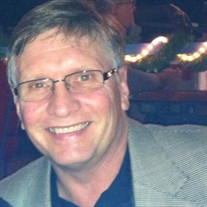 Craig Fulton Hull, 69, of Bentonville passed away on January 30, 2021, at Circle of Life Hospice after a valiant battle against cancer. Just like he dealt with his experiences in life, Craig managed his illness with positivity and strength that was inspiring. He only wanted to spend as much time with his loved ones, especially his grandchildren. On his last day, he was surrounded by those he loved. He was born to Mary Lou Smith Hull and Corry Fulton Hull on March 20, 1951, in Little Rock, Arkansas at St. Vincent Infirmary. Craig graduated from White Hall High School in 1969 and received a Bachelor of Arts degree in Anthropology from the University of Arkansas. During his time at the University of Arkansas, Craig was a founding member and a league organizer of the University of Arkansas Rugby team. He was married to Caelli Hull in 2000. Craig is survived by Caelli Hull of Bentonville, Arkansas; one sister and brother-in-law, Victoria Jones and Marcel Jones of Little Rock, Arkansas; one brother and sister-in-law, Jeff Hull and Janet Hull of Hickory Creek, Texas; two daughters, Brandy Armstrong of Rogers, Arkansas and Meredith Clement of Scottsdale, Arizona; one son and daughter-in-law, Corry Hull and Sarah Hull of Rogers, Arkansas; and two grandchildren that he adored, Sawyer and Carsyn Hull of Rogers, Arkansas. Craig is preceded in death by his parents Corry F. Hull and Mary Lou Hull. Craig was known for his zeal for life. He always had a kind word and a good story for all. He had a knack for storytelling and was always happy to help with his immense knowledge of real state and city planning. Craig’s love of rugby came to him in college, but he loved his time on the team, and he was incredibly proud of playing in the Aspen Ruggerfest in 2009 and 2012. Craig’s love for his family was second to none. He was lovingly called Big Daddy by his two grandchildren, and as the name suggests, there was no one like Big Daddy. Public services are pending for a future date in the spring when the gathering can be held outside. The family wishes to thank the staff of Highland’s Oncology, Circle of Life, and Nelson-Berna Funeral Services for outstanding care and kindness through this difficult time.

Craig Fulton Hull, 69, of Bentonville passed away on January 30, 2021, at Circle of Life Hospice after a valiant battle against cancer. Just like he dealt with his experiences in life, Craig managed his illness with positivity and strength that... View Obituary & Service Information

The family of Craig Fulton Hull created this Life Tributes page to make it easy to share your memories.

Craig Fulton Hull, 69, of Bentonville passed away on January...

Send flowers to the Hull family.