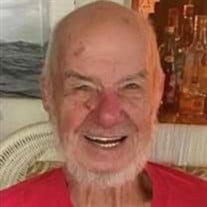 Dale Vincent Eis, age 85, passed away on Thursday, March 25, 2021, at the Arkansas State Veteran’s Home in Fayetteville. He was born on October 14, 1935, in Manhattan, Kansas, to Charles Loren and Helen (Banks) Eis. He is preceded in death by his parents; foster parents, Paul and Mary Foltz of Abilene, Kansas; brother, Charles Eis, III; sister, LaQuita Eis; and nephew, Charles Eis, IV. Dale graduated from high school in Abilene, Kansas, in 1953. He served in the Marine Corp and graduated from Emporia State Teachers College. He retired from a career with the FDIC. He joined the American Legion in Olathe, Kansas, and the Elks Lodge 1042. He became an Elk in Abilene at the age of eighteen. Dale was a trustee for Holiday Island Elks Lodge. He founded the Community Blood Center blood drive at Holiday Island Elks Lodge and the warm clothing drive. The Elks Lodge gave him many awards because of his volunteer activities. Dale was known for his t-shirt collection and wherever he went, people would comment on the saying or sometimes a funny picture of himself. Many of his shirts were made by good friends Ron Gianacarlo and Fred Brown. He is survived by his loving wife of fifty-five years, Jackie (Fisher) Eis of the home; two sons, Paul (Michelle) Eis of Olathe, Kansas, and Jason Eis of Milbrae, California; four grandchildren, Alicia (Josh) Martin, Roae Eis, Landon Eis, and Pilot Eis; two nephews, David (Becky) Eis of Royal Point, Missouri, and Gary Eis of Newton, Kansas; brother-in-law, Boyd Fisher of Holiday Island; and many friends.

Dale Vincent Eis, age 85, passed away on Thursday, March 25, 2021, at the Arkansas State Veteran&#8217;s Home in Fayetteville. He was born on October 14, 1935, in Manhattan, Kansas, to Charles Loren and Helen (Banks) Eis. He is preceded in death... View Obituary & Service Information

The family of Dale Vincent Eis created this Life Tributes page to make it easy to share your memories.

Send flowers to the Eis family.