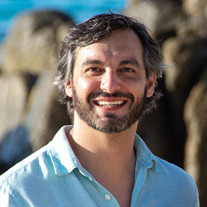 David Thomas Holland, age 39 of Fayetteville, Arkansas, passed from this life on Sunday, June 27, 2021. Dave, as he was known to nearly everyone, was born December 21, 1981 in Mena, Arkansas to Jack and Mary Holland. Dave graduated from Mena High School (2000), where he met his high school sweetheart Jennifer Dyer at the age of 15. He earned a Bachelor of Science in Business Administration from the University of Central Arkansas in 2004, and then moved to Fayetteville. He and Jennifer were married on May 23, 2004 at the Mildred B. Cooper Memorial Chapel in Bella Vista, and they resided in Fayetteville. Shortly after their marriage, Dave began working for First Security Bank in Fayetteville as a teller. He spent the next 14 years with them and worked his way up to becoming a senior vice president. In 2018, he joined First National Bank of Northwest Arkansas as their loan manager and was a senior vice president at the time of his death. His personality and straightforwardness were admired by his coworkers, and his customers loved him for his genuine interest in helping them accomplish their dreams. He loved helping others in any way he could. He was a member of the Metro Home Builders Association and the Steele Crossing POA and a graduate of Leadership Fayetteville in 2011. Although Dave spent his entire career as a banker, he possessed many other talents outside of finance. He loved spending time outside, especially in the woods, and felt the most at peace when he was surrounded by nature. He could create incredible sauces and sandwiches, was a master of grilling, and could fix nearly anything himself. He played baseball in high school and was a member of the marching band. He also taught himself to play the guitar. He loved red dirt country, hunting with his friends, and had an infectious smile. Dave is survived by his wife of 17 years, Jennifer, and their daughter, Jade, who is nine. He was an incredible father and husband. The family loved traveling together, discovering new places, and trying new foods, but they also loved spending time together in their backyard at home. Dave also leaves behind his parents, Jack and Mary Holland of Mena; sister Jackie (Holland) Scoggin, brother-in-law Blake Scoggin, and nephew and niece Cade and Olivia Scoggin, all of Farmington; grandmother Carol Deramus of Mena; mother-in-law JoAnne Mazur of Mena; and numerous aunts, uncles, and cousins. He was preceded in death by his grandfathers Harold Deramus of Mena and Ralph Holland of Fort Smith; his grandmother Lois Hanson of Poteau, Oklahoma; his aunt, Carolyn (Holland) Copelin, of Mena; and his cousin Tim Copelin of Mena. A celebration of Dave’s life will be held on July 5 from 3 to 5 p.m. at the family’s home. In lieu of flowers, friends have established a memorial fund in Dave’s name at First National Bank of NWA, but contributions can also be made to the Children’s Safety Center, of which Dave was previously a board member. He was loved by many and will be greatly missed.

David Thomas Holland, age 39 of Fayetteville, Arkansas, passed from this life on Sunday, June 27, 2021. Dave, as he was known to nearly everyone, was born December 21, 1981 in Mena, Arkansas to Jack and Mary Holland. Dave graduated from Mena... View Obituary & Service Information

The family of David Thomas Holland created this Life Tributes page to make it easy to share your memories.

Send flowers to the Holland family.