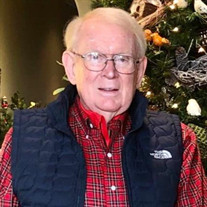 David Clark McClinton went to the arms of his heavenly Father from his earthly home surrounded by family, on March 14, 2021, at the age of 82. Born on June 26, 1938, in Fayetteville, Arkansas, David was the beloved only child of Christopher Clark and Marie Hardin McClinton. David is survived by his wife, Imelda Martin McClinton, four children, Michelle Wisdom (John), Kenneth McClinton (Beth), Amy Driver (Mike) and Chris McClinton (Lydia), his grandchildren Alexandra Pummill (Adam), Luke Wisdom, Samuel McClinton, Isaac McClinton, David Driver, Jack Driver, Mary McClinton, Clark Thomas McClinton and Ava Claire McClinton and two great-grandchildren, Lily Pummill and Jack Pummill. As a teenager, David overcame tuberculosis, spending nine months at the sanitorium in Booneville in 1957. In 1996, he bravely embraced experimental treatment for lymphoma at MD Anderson Cancer Center, claiming as his verse Psalm 119:71, “It is good for me that I have this affliction that I may learn Thy ways.” He spent the rest of his days cherishing family and friends. As a long-time member of University Baptist Church, David served the church in many capacities. He also enjoyed many years in Bible Study Fellowship. As a proud Fayetteville native, David was an alumnus of Jefferson and Washington elementary schools and a Fayetteville High School Class of ’56 Purple Dog graduate. He attended the University of Arkansas, where he was a member of Sigma Phi Epsilon fraternity, and he was a lifelong Razorback fan. David began his working life at the age of 14, paving roads as part of the road crew of McClinton Brothers Construction. David became a highway contractor and later served as president of McClinton-Anchor Division of APAC-Arkansas Inc. It is believed that McClinton Anchor Construction at one time had paved or overlaid every road in Washington County and most in Benton County. Throughout his life, David worked on numerous projects to improve the community and support the University of Arkansas’ education and athletic endeavors. He was one of the original founders of The Bank of Fayetteville, serving as chairman of the board on several occasions. He was a founding member and past president of NARTI, and past chairman of the Fayetteville Chamber of Commerce. David served on the boards of Arkansas Blue Cross Blue Shield, the Arkansas Board of Corrections, the Arkansas Institute of Theology, Ventures for Christ, the Northwest Arkansas Regional Planning Commission, the Associated General Contractors of Arkansas, and Arkansas Athletes Outreach. He was also a member of the University of Arkansas National Development Council. While a member of the Washington Regional Board of Directors for 24 years, he served as board chair four times. His drive and determination are often credited with helping to make the dream of building the current state-of-the-art medical center at North Hills a reality in 2002. In 2010, he was a proud recipient of the Washington Regional Foundation Eagle Award. David loved eating dessert first, hosting family gatherings, watching movies with happy endings, model trains, camping, boating, and trying, often successfully, to persuade his family to travel together in his RV.s. He also loved spending time on the Buffalo River, and he embraced the Low Gap Community, which he came to know and love. He was an avid reader and traveler. He enjoyed jazz, opera, bluegrass, and gospel music. David was the adored patriarch of his large family. Visitation will be held at University Baptist Church from 5-7pm on Thursday, March 18th. Memorial services will held be at University Baptist Church at 11am on Friday, March 19th. In lieu of flowers, donations can be made to Second Mile Ministries at University Baptist Church, 333 W. Maple Street, Fayetteville AR 72701; WelcomeHealth, 1100 N. Woolsey Ave. Fayetteville, AR 72703; or The Willard Walker Hospice Home, 325 E. Longview Street, Fayetteville AR 72703. Livestream link for funeral service: https://facebook.com/ubcfayetteville

David Clark McClinton went to the arms of his heavenly Father from his earthly home surrounded by family, on March 14, 2021, at the age of 82. Born on June 26, 1938, in Fayetteville, Arkansas, David was the beloved only child of Christopher... View Obituary & Service Information

The family of David Clark McClinton created this Life Tributes page to make it easy to share your memories.

David Clark McClinton went to the arms of his heavenly Father...

Send flowers to the McClinton family.