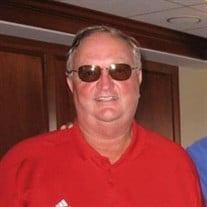 Don Alan Bryant, age 73, went to be with his Lord and Savior on February 12, 2021, following a brief battle with Covid 19. He was born November 14, 1947, in Camden, Arkansas, to the late Carlton “Speck” and Anna Frances Martindale Bryant. Don graduated from Camden High School in 1965, received a BA degree from University of Arkansas in Fayetteville in 1969, and on July 23, 1967 he married the love of his life, Jean Carolyn Calaway Bryant. They lived in Rogers, Arkansas, all of the 53 years of their marriage. They were partners in business as well as in life, as they began together their family business, DABCO, of which Don was owner and Chief Executive Officer. He lost his beloved wife Jean to pancreatic cancer just four months earlier on October 19, 2020. Don was an active member of Central United Methodist Church of Rogers throughout his adult life beginning in 1969. “SOSH”, as the grandchildren called him, was a big man who lived big, with strong opinions and a voice to match, but he had a heart of gold and was always willing to help others. In the hands of his grandchildren, he was a big ole softie. He loved taking his friends and family to “the farm” which was his “home away from home” He taught all the kids to fish and hunt there, most killing their first deer under his direction. Don is preceded in death by his wife of 53 years, Jean Carolyn; his parents, Speck and Frances Bryant; brother, David Carlton Bryant; infant granddaughter, Eloise Alice Boyett; and his longtime side-kick Mattie Dog. He is survived by son, Anthony Alan Bryant of Fayetteville; daughter, Amanda Ellen Bryant Boyett (Jay) of Rogers; grandson, Benton Wells Boyett, student at Kansas University; granddaughter Sybeal Alice Boyett of Rogers; and grandson, Thomas Alan Bryant (TAB) of Fayetteville, several nieces and nephews and a host of lifelong, devoted friends. Cremation arrangements were handled by Nelson-Berna Funeral Home of Rogers, Arkansas, with a dual celebration of the lives of both Don and Jean to be held at a later date to be announced. In lieu of flowers, the family asks that donations be made to: https://homefordinner.us/our-team (thanking local veterans) or Northwest Arkansas Children’s Shelter (giving safety and hope for local children

The family of Don Alan Bryant created this Life Tributes page to make it easy to share your memories.

Send flowers to the Bryant family.