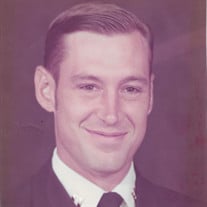 Douglas Howard May, age 78, of Bentonville, Arkansas, passed away on Thursday, May 12, 2022, after a long battle with Parkinson's disease. Douglas was born on November 15, 1943, in Cleveland, Ohio, the son of Orlyn Francis May and Medrith Jane White-Windsor May. He was preceded in death by both of his parents, his older brother Frederick Robert May, and his first wife Tamara Lynn Baber May. Douglas grew up in Cleveland, Ohio, but moved to Dallas, Texas with his parents as a young man. In 1962, at the age of eighteen, he joined the Dallas Fire Department. He served there as a captain from 1972 until his retirement thirty-seven years later in 1999. He also served honorably with the United States Navy. Douglas and his first wife Tamara were married in Dallas in 1965 and moved to Rockwall, Texas to raise their two children in 1974. Here they served with their family, their church, and their community for many years. After Tammy’s passing, Douglas married Rayma Ruth Roberts Norris in April 1992. Together they were members of Lake Pointe Church and served many years as members of Gideons International, which exists to help place Bibles into as many hands as possible both locally and around the globe. In 2016, due to several health issues, Douglas and Rayma relocated to Bentonville, Arkansas to be closer to Rayma’s daughter Kimberly and her extended family. Douglas was truly a wonderful husband, father, grandfather, and friend. He was a hard worker and a dedicated public servant. He lived his life to help and serve others and to make them smile, and he was one of the most genuine and generous people you could ever meet. He loved the Lord, and he will be deeply missed by everyone who knew him. Douglas is survived by his wife Rayma, his daughter Tisha Lynne May Cottman, her husband Brendon, and their four children, along with his son Russell Christian May, his wife Shanon, and their three children. He is also survived by Rayma’s three children David Norris, Kalynn Norris Fouche, and Kimberly Norris Dodd, along with their spouses, children, and grandchildren. In lieu of flowers memorials may be made to the Gideons International Lake Ray Hubbard Camp P.O. Box 2046, Rockwall, Texas 75087. https://gideons.org/donate

Douglas Howard May, age 78, of Bentonville, Arkansas, passed away on Thursday, May 12, 2022, after a long battle with Parkinson's disease. Douglas was born on November 15, 1943, in Cleveland, Ohio, the son of Orlyn Francis May and Medrith Jane... View Obituary & Service Information

The family of Douglas Howard May created this Life Tributes page to make it easy to share your memories.

Send flowers to the May family.