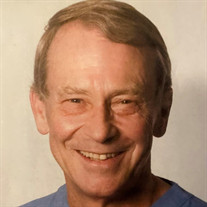 Dr. John P. Park, age 74, of Fayetteville passed away Friday April 22, 2022, in Fayetteville. He was born May 15, 1947, in La Junta, Colorado, the son of James D. and Leah E. Park (Stiewig). He was preceded in death by his parents and his brother, James C. Park. Dr. Park attended college and medical school at the University of Washington, graduating in 1972. He made stops at Strong Memorial Hospital in Rochester, New York, for his surgical residency and in Little Rock at UAMS for his Orthopedic Surgical residency. He completed his Sports Medicine Fellowship at Slocum and Larsen Clinic in Oregon before accepting a position with Ozark Orthopedics in Fayetteville. He also served as a voluntary team physician for the Arkansas Razorbacks for 30+ years. Dr. Park, for many years, was the Arkansas representative for the American Orthopedic Society for Sports Medicine and served on the Governor’s Council for Physical Fitness in Arkansas. Shortly after retiring, he accepted a position as the Medical Director at Tyson Foods for five years. When not taking care of his patients, Dr. Park had a vast array of hobbies he was passionate about. Whether he was fishing one of the many lakes around Northwest Arkansas or photographing the natural beauty of the area, he was always filling his schedule with things he loved. He also enjoyed biking the local trails, playing golf, snow skiing, and scuba diving. He was a diehard Hog fan until the end. Dr. Park also had a deep passion for music and even played keyboard in a few local bands for a number of years. He is survived by his brother Jim’s wife Martha Rawls, brother Robert G. Park and wife Kay, his love Julie Ruth, and his children Jessica of Fayetteville, John, and wife Michelle (grandchildren Leo and Addison) of Fayetteville, and Kim and husband Ethan (granddaughter Laurel) of Clayton, California. Visitation will be held Friday April 29, 2022, from 5-7PM at Moore's Chapel with a private graveside service held at Bluff Cemetery in Springdale. In lieu of flowers, memorials can be made to the Humane Society of the Ozarks, the American Cancer Society, or Central United Methodist Church in Fayetteville, of which he was a member.

The family of Dr. John P. Park created this Life Tributes page to make it easy to share your memories.

Send flowers to the Park family.