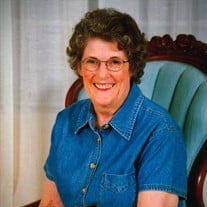 Edith Allen Griffin, 88, died Saturday, Feb. 20, 2021, surrounded by family. She was born July 30, 1932, in McAdoo, Texas., one of seven children lovingly raised by Charles and Gladys Dillon Allen. Edith played basketball at McAdoo High School and she was her class valedictorian, but as she amusingly revealed to people, her graduating class was made up of only three students. She married her childhood sweetheart John Griffin upon graduation, and supported him through his many postings as a career U.S. Army NCO. Edith spent 25 years as a teacher and later director of the Play Learn School at First Baptist Church of Fayetteville. She also served as preschool coordinator and teacher for the Protestant Chapel, Augsburg, Germany. Edith had many hobbies and interests, among them genealogy, quilting and history. A lifelong quilter, her quilts are today treasured by three generations of the Griffin family, including her four great grandchildren. She was a member of the Marion Chapter of the National Society of Daughters of the American Revolution and also served as the chapter’s librarian and historian. She and John were members of the Foothills of the Ozarks Antique Auto Club, and they enjoyed many outings in their beautifully restored 1940 Ford Coupe convertible. She served as a den mother for the Brownies and Cub Scouts, and was a member of the First Baptist Church of Fayetteville where she once taught Sunday school to four-year-olds. Edith started her day with a cup of coffee and the sports page, and she credits her father with instilling a love for baseball at all levels. She followed the Fayetteville Bulldogs, Razorbacks and Texas Rangers. As wife to a career serviceman, Edith gave birth to her three children on army bases and spent many years living on or near bases in Texas, Oklahoma and Germany. She moved to Fayetteville in 1969 when her husband retired from the military and took a position with the Post Office. Preceding her in death is her husband, John William Griffin; two children, James Alton Griffin and Carolyn Griffin Hughes; and four siblings, Betty Jo Greene, Anita Ray Callahan, Charles Wayne Allen and Jimmy Farest Allen. She is survived by daughter Patsy Miller and husband Bob of Norman, Okla.; daughter-in-law Caroline Griffin of Jackson, Miss.; son-in-law Charlie Hughes of Fayetteville; sisters Lanell Allen of Fort Worth, Texas, and Sandra Karen Vest of Ashburn, Va.; grandchildren Cathy Miller and Kelly Miller of Norman; Rebekah Payne and her husband Jeff of Memphis, Tenn.; John William Griffin and wife Anna Claire of Monroe, La. and Stephen James Griffin of Jackson; great grandchildren Caroline, Annie Michel and Elizabeth Payne of Memphis, and James DeBron of Norman; and honorary “daughter” Janie Hughes Montgomery of Fayetteville. She is also survived by sister-in-lawn, Billie Griffin Evans of Lamoni, Iowa, and numerous nieces and nephews. Edith spent most of the past two years as a resident of Providence Assisted Living in Springdale, and she was briefly a resident of Brookdale Norman. The family is thankful for the care and compassion shown her by the staff of both homes, and a special thanks is also due the caregivers of Good Shephard Hospice of Norman. The final two to three years of Edith’s life were not easy; she witnessed the death of two of her children, her failing health prompted a move to assisted living, and like many who live in group homes, she suffered through periods of isolation as a result of quarantines brought on by COVID. But Edith exemplified a life well-lived. She was happiest hosting family gatherings around holidays, and she was deeply loved by her family. Her legacy is one of generosity, kindness and service, which she passed on to the thousands of children she taught, along with most everyone who was fortunate enough to be a part of her world. Those wishing to honor her memory may make donations to Play Learn at FBC or World Mission Offering at FBC. Learn more at fbcfayetteville.org/giving. Burial will be in alongside her husband in the Fayetteville National Cemetery. Due to the pandemic, the family will hold a private graveside service with plans to hold a memorial service later in the year.

The family of Edith Allen Griffin created this Life Tributes page to make it easy to share your memories.

Send flowers to the Griffin family.