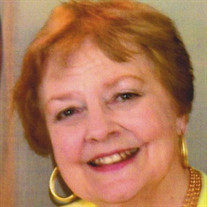 Eleanor Ellis Bodenhamer Frank passed away peacefully at home surrounded by family - both in person and virtually - on February 8, 2021 at the age of 84. She was born on July 15, 1937, in Stillwater, Oklahoma. Eleanor is survived by four children: a daughter, Ann Rosso and son Bob Bodenhamer of Fayetteville, Arkansas, son and daughters-in-laws Jim and Sue Bodenhamer of Parker, Colorado, John and Nina Bodenhamer of Fort Collins, Colorado; two step sons, Carl V. Frank of Traskwood, Arkansas, and Rick V. Frank & Deanna Frank of Katy, Texas; seventeen wonderful grandchildren: Erin, Justin, Elle & John Michael Ternes, Lauren Rosso &Turner Tomlinson; Hannah, Leah, Eliza Bodenhamer, Gigi and Brock Golden; Lena and Elizabeth Bodenhamer; Sarah, Emily, Abby Jo, and Katherine Bodenhamer, and Hillary Frank; former spouse, Lee Bodenhamer, and special friends Seth McIntosh and Wayne Britt. She was preceded in death by her husband Ben Frank, her parents Lippert S. and Carleen Klocke Ellis, one brother, Carl Ellis, son-in-laws Jud Ternes, Stuart Rosso and daughter-in-law Melissa Greer Bodenhamer. A co-valedictorian graduate of Fayetteville High School, she was a cum laude B.A. graduate of the University of Arkansas at Fayetteville, and later a graduate assistant teaching English. While an undergraduate, she was selected for membership in Phi Beta Kappa, Mortar Board, Who’s Who in American Colleges and Universities, and was the recipient of numerous awards from various college, alumni, honorary, service, and athletic organizations. Later, she earned a B.S.E. from the University of Arkansas at Little Rock, and completed many hours of graduate work at UAF, UALR, and Cambridge University in Cambridge, England. She was also a research assistant at Radcliffe Institute for Independent Studies in Cambridge, Massachusetts. Her life-long love of learning led her to a rich secondary teaching career in Little Rock, where she taught at Booker Junior High, Pulaski Heights Junior High, Hall High and Central High. At Central, she taught twelfth grade English and was Student Council Sponsor for many years. In 1987, she received a Stephens Award for Outstanding High School Teachers. Through the years she enjoyed volunteering at Presbyterian Church camps, teaching Sunday school and assisting in youth programs. In addition, she was involved in tutoring, PTA, Cub Scouts, Explorer Scouts and Red Cross activities as her beloved children were growing up. Special thanks to her grandchildren Erin and John Michael Ternes who lovingly cared for her at home since April 2020. Private service will be held at a later date. Burial will be at Fairview Cemetery in Fayetteville Arkansas. In lieu of flowers, contributions may be made to Heifer International, the Little Rock Library System, Washington Regional Hospice, or to any charity of choice. Please sign the online guest book at www.bernafuneralhomes.com

Eleanor Ellis Bodenhamer Frank passed away peacefully at home surrounded by family - both in person and virtually - on February 8, 2021 at the age of 84. She was born on July 15, 1937, in Stillwater, Oklahoma. Eleanor is survived by four children:... View Obituary & Service Information

The family of Eleanor Ellis Bodenhamer Frank created this Life Tributes page to make it easy to share your memories.

Send flowers to the Frank family.