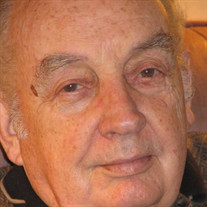 Etsyl J Sparkman of Rogers, age 97, passed peacefully on October 12 in Rogers, Arkansas. He was preceded in death by his parents, Seth and Gertie (Herndon) Sparkman; brothers Denzel, Robert, and James; his wife, Rayma (Johnson), and son, Lance. He is survived by Lyle Sparkman and wife Martha, of Springdale AR; Debra Choate of Everton MO and her husband, Dan. He is also survived by his grand-daughter, Sarah, and her spouse, Roger Eubanks, of Fayetteville; two step-grandchildren, Gena Choate and Clint Choate and wife Ashley, and their sons, Tyler Ozug and Cooper Choate. Etsyl was hired as a high schooler by Citizens Bank of Springfield, Missouri before the outbreak of World War II. At the start of the war, he enlisted in the USAAF and served 34 months in the Pacific Theater as the communications chief for the famed 9th Fighter Squadron, the most decorated Air Force unit in U.S. history. The personal account of his war experience is recorded in the Library of Congress as the “Etsyl Sparkman Collection.” He returned to civilian life in November, 1945 to marry and resume a banking career. He was a graduate of the commercial banking program at Rutgers University (1953). In the years following, he was cashier and trust officer of Citizens and then Commerce Bank in Springfield, Missouri; president of 1st State Bank of Rolla, then president of Empire Bank, again in Springfield. While acting as a district governor of the Lions Club, he succeeded in helping to establish the Missouri Eye Bank, housed in Columbia, Missouri. After his Missouri years, he moved to Rogers and became active with Farmers and Merchants Bank. He served the community as a board member of the Rogers Museum and president of the Rogers’ Rotary Club. He concluded his community service as the original executive director of the Northwest Arkansas Community College Foundation at the age of 78. He was a faithful member of the First Baptist Church of Rogers, a 32nd degree Mason (Scottish Rite), and laid to rest beside his wife and son in East Lawn Cemetery in Springfield, Missouri. Memorial contributions may be directed to the Circle of Life hospice program.

The family of Etsyl J. Sparkman created this Life Tributes page to make it easy to share your memories.

Send flowers to the Sparkman family.