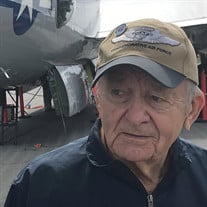 Eugene (Gene) Paryzek, 89, passed suddenly on Thursday, April 1, 2021 at his home overlooking Beaver Lake in Rogers, AR. He was born a first generation US citizen in Berwyn, IL on October 4, 1931 to Joseph and Bozena (Bessie) Paryzek who emigrated from Czechoslovakia (Czech Republic) in 1923 and 1929 respectively. Gene was a graduate of Hinsdale Township (IL) High School and a very proud Air Force veteran, serving his country from 1951 through 1955. As Airman First Class, stationed in Japan, he was assigned to the 56th Strategic Reconnaissance Squadron, Medium, Weather supporting the Korean Conflict as both a mechanic on the ground and a scanner in the air on specially modified (W)B-29 aircraft during long distance reconnaissance flights where enemy contact was probable and expected. Upon honorable discharge from the Air Force and his 1955 marriage to Emily Rose (Burek), Gene had a 20 year career with Sears in the Chicago, IL area as a service/repair technician and warehouse manager. The family of four, including daughter, Kathy and son, Gary, then somewhat abruptly decided to relocate to Rogers, AR in 1975. This decision was belatedly influenced by the intuition and foresight of Gene’s father Joseph (1899-1961) who, in the mid 1950’s, predicted that living and working in an area between Harrison, AR and Tulsa, OK might in the future prove to be a wise, opportunistic decision. Together the family took that fateful leap 45 years ago, resulting in all four members collectively amassing more than 90 years of Walmart employment. Gene was a fierce supporter of family and friends whose work ethic, integrity, loyalty and intellectual strength could not be matched. He taught and led by example and always centered his deeds and actions around simply doing the right thing. When you met him, you liked him. When you got to know him, you loved him. His sense of humor somehow made you both laugh and learn. He enjoyed good food, gatherings of any kind with friends and family, laughter and love. He cherished his many outings and adventures with Emily Rose, from the casinos in Oklahoma and on Alaskan cruise ships, to Europe with friends, and Hawaii with family. Baseball was his favorite sport, the Chicago White Sox his favorite team. Three generations of Sox fans sharing the final out of the 2005 World Series his favorite baseball moment. He knew – still knows - that baseball is so much more than a game. Gene is survived by a loving family headed by his “rock” and ours, Emily (Emy) Paryzek, the love of his life and dedicated partner in an extraordinary marital union of 65 years; his daughter, Kathy Cox and husband Kenneth; his son Gary Paryzek and wife Krisi, and five grandchildren he could not have more proudly loved; Sarah Cox, Melissa Cox, Scharla Paryzek and fiancée, Alex Folsom, Lexy Paryzek and Jarrin Paryzek. Cremation arrangements are by Nelson-Berna, Rogers, AR. There will be a private family service on Friday, April 9, 2021 at 2:00PM that will be live streamed at https://my.gather.app/remember/eugene-paryzek. Although no public service will be held, the family is privileged and forever grateful to have Carl Johansson, Kenneth Cox, Bob Busby, Larry Burnside, Kenneth Winter and Jarrin Paryzek serve as our honorary pallbearers. The family will later arrange an early autumn gathering for Gene’s friends and extended family to celebrate his life and legacy. In lieu of flowers, donations in Gene’s name may be made to Arkansas Children’s Hospital Northwest or St. Jude’s Children’s Research Hospital.

Eugene (Gene) Paryzek, 89, passed suddenly on Thursday, April 1, 2021 at his home overlooking Beaver Lake in Rogers, AR. He was born a first generation US citizen in Berwyn, IL on October 4, 1931 to Joseph and Bozena (Bessie) Paryzek who emigrated... View Obituary & Service Information

The family of Eugene "Gene" Paryzek created this Life Tributes page to make it easy to share your memories.

Customized sympathy cards. Mailed for you.