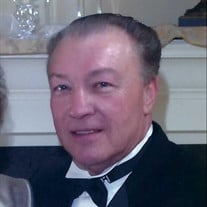 Dr. Fletcher Baugh, 82 of Springdale, AR passed away Wednesday, September 15, 2021 in Rogers, AR. He was born January 4, 1939 in Pine Bluff, AR to Louis Fletcher Baugh Sr. and Juanita (Rice) Baugh. Fletcher played football for Pine Bluff High School and was recently named to the 100 Best Arkansas High School Football Players of All Time List. Although he was primarily an offensive lineman, he made this team as a defensive player. In 1957, Fletcher signed to play football and baseball at LSU. He transferred to the University of Arkansas in 1958 to play for his beloved Razorbacks. He was a member of Frank Broyles’ SWC Championship Teams from 1959-1961. He left the University of Arkansas to enroll early at Southern College of Optometry where he graduated in 1965. He moved his family back to Pine Bluff and soon joined Dr. Boyce Alford as a partner and operated optometry offices in both Pine Bluff and England for over forty years. When Dr. Alford retired in 1988, Fletcher was soon joined in the practice by his son Stephen. In 2001 he met and wed the love of his life, Linda. They had 20 years together building a wonderful life and happy memories. Fletcher was a long-time member of the Road Hogs, and he (later with Linda) followed the team in his motorhome wherever they played and made lifelong friends along the way. He spent many hours teaching his oldest grandkids (and later his dog Rumble) how to call the Hogs. He will be remembered for his amazing storytelling and huge infectious laugh. Go Hogs! He was preceded in death by his father Louis Fletcher Baugh Sr. and mother Juanita Rice Baugh Raymick. He is survived by his wife of 20 years, Linda Sue Baugh; three sons, Scott A. Baugh (Kim) of Alva, OK, Dr. Stephen L. Baugh (Sheri) of White Hall, AR, Jason A. Baugh (Laci) of Ft. Smith, AR, bonus daughters, Natalie S. Ledbetter (David) of Lowell, AR, Kimberley R. Shroyer (Pat) of Gold Canyon, AZ; and nine grandchildren, Brady and wife Rachel, Haley, Kirk, Kathryn, Peyton and Brooklyn Baugh, Trey and Ashton Tate, and Caleb Shroyer. Memorial services will be held 10:00 AM, Saturday, September 25th in the Chapel of Nelson-Berna Funeral Home in Fayetteville. The family requests that contributions be made to one of two foundations, in memory of Dr. Fletcher Baugh - The Razorback Foundation to support Scholarship Endowments for Razorback Student-Athletes. Donations can be made via mail at 1295 S. Razorback Road, Ste A, Fayetteville, AR 72701, or phone at 479-443-9000. Or, to the Springdale Animal Shelter Foundation at 479-750-8166. Donations to either may be tax deductible. To sign the online guest book please visit www.bernafuneralhomes.com

The family of Dr. Fletcher Baugh created this Life Tributes page to make it easy to share your memories.

Send flowers to the Baugh family.