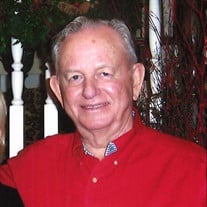 Frank E. Gathright passed from his earthly life to his heavenly home on August 5, 2021 in Fayetteville, Arkansas. He was born on February 18, 1927, the son of Thomas and Eather Stanton Gathright, in Saratoga Arkansas. After graduating high school in 1944, he began work at Ideal Basic Industries where he was purchasing manager. He was drafted into the army during World War II, stationed at Camp Kilmer, New Jersey and was pulled off a ship bound for the European theater because there was an urgent need for good typists. After the war, he married Patricia Hughes and they lived in Okay and later Ashdown, Arkansas. They moved to Fayetteville in 1990 to be closer to their daughter and grandchildren. Upon retirement from Ideal, he began his second career at Pinnacle Country Club where he was Golf Car Supervisor (with an occasional round of golf as an added bo-nus). He loved all sports, but especially golf and baseball. He coached Little League, Pony League and American Legion as well as girl’s softball for many years. Scores of young men and women fondly remember “Coach Frank” or “Coach Gathright”. He was predeceased by his wife, Patsy, his parents, his brothers Lyn, Glen, and Dale and his sister Doris Hughes Conley. He is survived by his daughter, Cindy Gathright McNair and husband Mark, grandchildren Lauren Sapone (Tadd) and Cole McNair (Caroline) and grandchildren Stella and Julian Sapone and Evelyn, Avery and Charlotte McNair all of Fayetteville. A graveside service will be held on Wednesday, August 11 at 11:00 a.m. at Saratoga Cemetery, Saratoga, Arkansas. Memorials may be made to Saratoga Cemetery Fund, P.O. Box 114 Saratoga, AR 71859 or First Baptist Church, 20 E. Dick-son St., Fayetteville, AR 72701. Please observe Covid precautions by wearing a mask. To sign the online guest book please visit www.bernafuneralhomes.com

Frank E. Gathright passed from his earthly life to his heavenly home on August 5, 2021 in Fayetteville, Arkansas. He was born on February 18, 1927, the son of Thomas and Eather Stanton Gathright, in Saratoga Arkansas. After graduating high school... View Obituary & Service Information

The family of Frank E. Gathright created this Life Tributes page to make it easy to share your memories.

Frank E. Gathright passed from his earthly life to his heavenly...

Send flowers to the Gathright family.