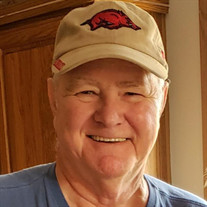 Frankie L. Kitchens, age 74, of Springdale, died Sunday, June 20, 2021 in Springdale. He was born July 28, 1946 in Ft. Smith, Arkansas, son of the late Lewis Andrew and Bertha Mae Garrett Kitchens. He spent most of his professional career finishing sheetrock, and in his later years, drove for Xpress Couriers and Colliers Drug Store, delivering medications. For anyone that knew Frank, they knew that he was a jack of all trades. Franks many professional trades included working as a tool pusher in the oil fields of Montana and as a craftsman in the construction industry. After retiring as a drywall finisher, Frank spent the rest of his life enjoying hobbies such as fishing, baking, book and song writing, wine making and so many others. He was always up to telling a good story and could make every story sound wonderful and adventurous, even if you had heard the story fifty times before. One of the things his children and grandchildren remember the most about him were the funny things he would say. Inventive nicknames included "Pretty Face" for his wife "Spider Dude" for his grandson, and saying "Be sure and write" anytime someone would leave the room. He is preceded in death by siblings Estelle Wilson, Lewis Andrew Kitchens, Jr., and Dairl Kitchens. He is survived by wife Priscilla Kitchens, married 56 years, brother Gaylon Kitchens, sisters Margaret James, and Sarah Jo Parker, daughter Kelli, her husband Greg and their two children Krisenda and Keely, daughter Nicole, her husband Dan and their two children Gavin and Gillian, as well as many nieces, nephews, and cousins. Memorial service will be 1:00 pm, Wednesday, June 23, 2021 at Moore’s Chapel.

The family of Frankie L. Kitchens created this Life Tributes page to make it easy to share your memories.

Send flowers to the Kitchens family.