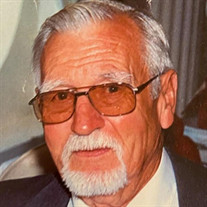 Gary W. Vinson, age 84, passed away, Thursday, August 19, 2021, in Rogers, Arkansas. He was born on April 10, 1937, in Bentonville to Benjamin and Ollie (Burgess) Vinson. He is preceded in death by his parents, brothers; Coy and Ben Vinson, and stepsons; Joey, Dennis, and Randy. Gary was a lover of sports. He was a captain of the football, baseball, and basketball teams of Beaumont High School. Gary was thought to be one of the best athletes from his Alma Mater. He was a proud American and served is the US Army for three years, and later the Army National Guard where he retired after 32 years. He stayed in touch with some of his military friends throughout his life. Gary was a family man and loved making new memories with them. One of his fondest memories being his 80th Birthday that he celebrated on a cruise ship with 35 of his family and friends. Gary was a jokester and enjoyed telling jokes and pulling pranks on his nieces, nephews, and grandchildren. Gary is survived by his loving wife of 43 years, Sandra Vinson of the home, children; Sandy Pudden and husband Bob, of Arkansas City, KS, Gary Vinson Jr. and wife Julie of Colorado Springs, CO, Joette Rodriguez and husband Dan of Cave Springs, Jody Cap of Sky Valley, CA, grandchildren; Justin (Shania) Rodriguez, Cody (Crystal) Vinson, Corey (Alyssa) Vinson, Carlee (Mark) McCrary, Christian (Claire) Vinson, Austin (Jess) Rodriguez, great-grandchildren; Journee Kimbro, and Winter Vinson, siblings; Joy Linden and Roma Greco, and a host of nieces and nephews. A graveside service will be held at Fayetteville National Cemetery on Friday, August 27, 2021, at 11:30 AM with Military Honors. Guest are invited to join the family at a luncheon at 12:30 PM at Golden Corral in Rogers. Cremation arrangements have been entrusted under the direction of Nelson-Berna Funeral Home of Rogers. To place an online tribute, please visit www.bernafuneralhomes.com

Gary W. Vinson, age 84, passed away, Thursday, August 19, 2021, in Rogers, Arkansas. He was born on April 10, 1937, in Bentonville to Benjamin and Ollie (Burgess) Vinson. He is preceded in death by his parents, brothers; Coy and Ben Vinson,... View Obituary & Service Information

The family of Gary W. Vinson created this Life Tributes page to make it easy to share your memories.

Send flowers to the Vinson family.