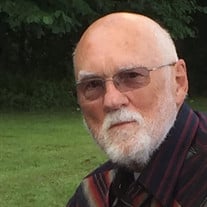 George Edward Goode Jr., of Springdale, AR, went to his heavenly home where he was reunited with his loving wife on October 8, 2021. He exemplified the term "a life well-lived". He was born on October 19,1935 to George Edward Goode Sr. and Ida Beard Goode. He was an only child and grew up on a farm outside of England, Arkansas. After graduating from England high school, he attended Ouachita Baptist University in Arkadelphia, Arkansas, from which he graduated with a bachelor’s degree. He was the first person in his family to graduate from college. George served in the United States Army for 2 years as a 2nd lieutenant stationed in Milwaukee, Wisconsin. Upon honorable discharge, he moved to El Dorado, Arkansas to take his first job. Little did he know that there he would meet the great love of his life, his beautiful wife Carol. They married in 1961 and moved to Lexington, Kentucky, following George's career. In 1964 George and Carol started their family with their son, Allen. Later they moved to Little Rock, Arkansas to be closer to family. In 1969 they completed their family with their daughter, Melissa. They raised their family in Little Rock for 41 years and then moved to Northwest Arkansas. After the death of his wife, he moved in with his daughter and spent the rest of his life enjoying his retirement years, watching baseball, and building a family of friends in both Arkansas and Massachusetts. George enjoyed a long and successful career at St. Paul Fire and Marine Insurance company, where he was much loved by his colleagues. When George was eleven, he listened to his first base ball game, a World Series game between the Boston Red Sox and the St. Louis Cardinals. This began his lifelong love of baseball and especially the Cardinals. He loved to score baseball games and kept all his scorecards over the years; it was an impressive effort and collection. You could say "Hey George, what was the score of the Cardinals vs. Cubs in 196?" and he could find the answer. His other great passion was anything related to the Arkansas Razorbacks. His favorite thing was any Arkansas team beating Texas, so it was fitting that his last game was Arkansas thrashing Texas in football. He was preceded in death by his parents and his wife of 46 years Carol Goode. He is survived by 2 children George Allen (Diane) of Jacksonville, AR, Melissa McCall of Springdale, AR. 5 grandchildren Brandon McCall of Huntsville, AR, Cameron McCall of Springdale, AR, Selina McDowell (Martin) of St. Louis, MO, Brittany Teal (Matt) of Columbia, SC, Sonja Teal of Columbus, OH. 2 great-grandchildren Conner and Kammie Harris of St. Louis, MO. A celebration of George's life will be Saturday October 23, at 11:00 at Nelson Berna Funeral Home in Fayetteville. Visitation is from 10:00 a.m. until service time Saturday, October 23, at Nelson Berna. Stories of George are encouraged and appreciated. Think of George the next time you call those Hogs. Burial will be in Fairview Memorial Gardens Cemetery. The service will be live streamed and may be viewed at https://my.gather.app/remember/george-edward-goode-jr

The family of George Edward Goode Jr. created this Life Tributes page to make it easy to share your memories.

Send flowers to the Goode family.