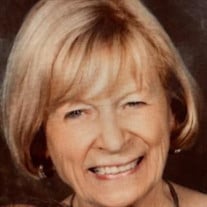 Grace June Cromwell, 89, of Fayetteville, Arkansas, formerly of Lake Junaluska, North Carolina, and Stuart, Florida, passed away December 12, 2021, at home. She was born June 28, 1932, in Miami, Florida, to Wesley and Annie (Hill) McMillan. June attended Florida State University and graduated in 1954 with a bachelor’s degree in Social Work and a minor in Education. While at FSU, she pledged the Alpha Chi Omega sorority, was a member of Garnet Key Honor Society, and was Honor Committee Chairman of FSU’s Student Government. After graduation, June moved to Raleigh, North Carolina, where she was a youth director at the YWCA, and met the love of her life, Guy Cromwell. June and Guy were married on April 1, 1956, and made their home in Tallahassee, Florida, eventually moving to Stuart, Florida. June taught kindergarten at the First United Methodist Church in Stuart, and third and fourth grade at J. D. Parker Elementary School and Jensen Beach Elementary School. She was a former president of the Stuart Woman’s Club, and a lifetime member of P. E. O. During her retirement years, she moved to Lake Junaluska, North Carolina, where she volunteered at various Methodist ministries. She was preceded in death by her husband, Guy Cromwell, to whom she was married 56 years, and her brother, Elwood McMillan. June is survived by her four children, Leslie (Kerry) Meier, of Fayetteville, Arkansas; Richard (Melissa) Cromwell, of Springdale, Arkansas; Laurie (Jeff) Lauter, of Kuala Lumpur, Malaysia; and Melanie (Frank) Robinson, of China Grove, North Carolina; and her six grandchildren, Hilary, Paulina, Christina, Shannon, Ryan, and Jacob; and her two great-grandchildren, Grace and Wyatt. A celebration of her life will be held at Long’s Chapel, 133 Old Clyde Road, Waynesville, North Carolina, on December 27, 2021 at 11:00 am. In lieu of flowers, memorial donations may be made to Long’s Chapel, 133 Old Clyde Road, Waynesville, North Carolina 28785; or the Alzheimer’s Association, act.alz.org/donate or 800-272-3900.

The family of Grace June Cromwell created this Life Tributes page to make it easy to share your memories.

Send flowers to the Cromwell family.