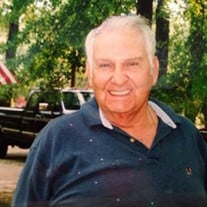 Jack Harrell Riley, age 84, of Rogers, AR passed away Friday January 15, 2021 in Rogers. He was born July 20, 1936 in Halley, Arkansas the son of Sidney Clarence and Lois Virginia Reaves Riley. He was the youngest of 3 children. Jack was preceded in death by his parents, his sister Dorothy Virginia Riley Smith and his brother Sid Reaves Riley, as well as his wife June Annette Riley. Jack graduated from Dermott High School in 1954. He studied Business Administration and Management at the University of Central Arkansas and the University of Arkansas at Monticello. He then proudly served in the United States Army and was stationed in Thailand in 1961. After returning to the United States, Jack studied banking at Memphis State. Jack and June were married in 1963 at Dermott Baptist Church and eventually settled in Watson Chapel to raise their two children, Blake and Rebecca. He was a loving and devoted husband and father. Jack served as the Vice President of Pine Bluff National bank for several years and then worked in sales for several Arkansas companies. Jack, June, and their children were long time members of Watson Chapel Baptist Church, which he loved very much. Jack enjoyed watching Razorback sports, cooking, fishing,and visiting with family and friends. “Jack Daddy”, as he was called by his family, had a wonderful sense of humor that his family will cherish for years to come. After retirement, Jack and June moved to Northwest Arkansas to be closer to their family and joined the First Baptist Church of Bentonville, where they met many new friends. Jack was a faithful Christian who loved the Lord with his whole heart, and it was reflected in how he lived his life. He is survived by his son Blake Riley and his wife Lisa of Rogers, their children Sid Riley, Madeline Riley, Claudia Riley, Braydon Riley, Hunter Riley, as well as Sid’s daughter, Jack’s great granddaughter, Michelle Riley. He is also survived by his daughter Rebecca Barkhuizen and her husband Louis of Austin, Texas and their children Camille Barkhuizen and Anna Grace Barkhuizen. Graveside service will be held 11:00 a.m. Monday January 25, 2021 at Dermott City Cemetery with military honors under the direction of Nelson-Berna Funeral Home Rogers.

Jack Harrell Riley, age 84, of Rogers, AR passed away Friday January 15, 2021 in Rogers. He was born July 20, 1936 in Halley, Arkansas the son of Sidney Clarence and Lois Virginia Reaves Riley. He was the youngest of 3 children. Jack was preceded... View Obituary & Service Information

The family of Jack Harrell Riley created this Life Tributes page to make it easy to share your memories.

Send flowers to the Riley family.