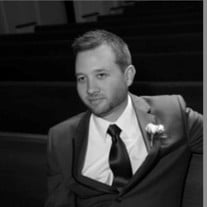 James Alexander "Alex" Burris, 36, passed away on Wednesday, March 31, 2021, at UAMS in Little Rock after a 4-year battle with Non-Hodgkin’s Lymphoma. He was born on May 2, 1984, in Chicago, IL, to Mark and Billie "Sue" (Fletcher) Burris of Malvern, AR. He is preceded in death by his grandparents, Mitchell and Bonnie Burris of Malvern, AR; and JL and Billie Fletcher of New Philadelphia, OH. Alex is survived by his wife, Summer Nicole (Conquest) Burris; their two sons, Ethan Alexander and William Fletcher; his parents, Mark and Sue Burris; his sister, Adrianne Burris of Fayetteville, AR; his mother and father-in-law, Michael and Teresa Conquest of Lamar, AR; sisters-in-law, Ashley and her husband, Tom Clement, of West Fork, AR; Laura Conquest and her fiancée, Preston Kimbriel, of Alma, AR; and two nephews, Colton and Aedan Clement of West Fork, AR. He graduated from Malvern High School in 2003, where he participated in Beta Club, Boys State, band, Student Council, the Hot Springs County Youth Board, and he was also a peer counselor. Alex attended the University of Arkansas, where he received his BSBA in Finance and Economics in 2008 and then earned his MBA in 2013 from the Sam M. Walton College of Business. He was a proud member of the Phi Alpha chapter of Phi Gamma Delta Fraternity during his time at the U of A, where he met many of the friends who became “framily” later on in life. Alex was passionate about giving back to others throughout his life, with a few organizations holding a special place in his heart. He was incredibly passionate about volunteering with the NWA chapter of the American Diabetes Association (ADA), volunteering at the annual Kiss a Pig Gala and Tour de Cure, eventually stepping into a role as a Tour de Cure co-chair from 2016-2020, even as he battled his own illness, which was a testament to the kind of man Alex was. Starting in college, Alex was surrounded by a group of close friends that were more like family; thus, the “framily” was born. This group has only continued to grow each year to include spouses, significant others, new friends, and so many kids. There wasn't much the framily didn't celebrate together throughout the years, from backyard cookouts to birthday celebrations, vacations, holidays, and their annual Christmas Party. However, Alex’s greatest joy in life came from spending time with his wife and two boys. He loved being outdoors and enjoyed showing them his love for camping, hiking, kayaking, and fishing. He was also an avid mountain biker and looked forward to sharing the trails of Northwest Arkansas with his boys one day. He was the best video game player, superhero, and train track builder. Most evenings at home would end in a dance party, complete with Alex and his boys jamming out on their guitars. Alex was the epitome of a family man and loved spending as much time as possible with his parents and sister, as well. In recent years, Mark and Sue purchased a home in Fayetteville to be closer to Alex, Summer, the boys, and Adrianne. They enjoyed hiking local trails, fishing, boating, numerous family meals, celebrating birthdays and holidays, and, of course, playing “tickle monster” with the boys. Alex made sure that Adrianne was well taken care of and was always eager to fix things around the house and help with any projects. Alex also loved spending time with his in-laws, Michael and Teresa, at their house in Lamar, where you’d either find him fishing with his boys and father-in-law, enjoying a cookout, or attending a holiday gathering, like their annual 4th of July celebration. He had a very special bond with his wife’s maternal grandfather, Raymond Williams of Fayetteville, AR, who is also battling Lymphoma and served as an inspiration of faith to Alex throughout his own battle. Alex attended Fellowship NWA since college and continued to attend with Summer and his boys. He and Summer have most recently been active in a young family community group for the past few years led by one of his best friends from college that was near and dear to both of their hearts. Throughout his cancer journey, Alex’s faith only deepened through each trial and setback. He was always sure that no matter what was thrown at him, his story would be used as a testimony to lead others to Christ, and judging by the stories shared by family, framily, and friends, he accomplished that plenty of times in his short time on Earth. His family and friends are comforted knowing that Alex is now at peace and cancer-free in Heaven. A visitation will be held Friday, April 9, from 4–7 pm at Nelson Berna Funeral Home, 4520 N. Crossover Rd. Fayetteville, AR. Alex’s Celebration of Life service will be held on Saturday, April 10 at 10:00 am at Fellowship Fayetteville Church, 3447 AR 112 Fayetteville, AR 72704. Followed by a private family grave-side service at Fairview Memorial Gardens, Fayetteville AR. A live webcast is available at the following link, https://www.youtube.com/watch?v=xYimLld_j6I&feature=youtu.be In lieu of flowers, donations can be made in Alex’s honor to the Leukemia & Lymphoma Society or the American Diabetes Association.

The family of James Alexander "Alex" Burris created this Life Tributes page to make it easy to share your memories.

Send flowers to the Burris family.