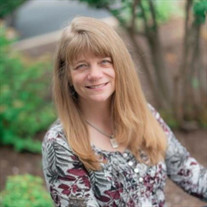 Jean Ann (Rowley) Henderson, 56, of Bentonville, AR was born on July 23, 1964 in Pana, IL to Thomas and Margaret (Nieman) Rowley. She died unexpectedly on Saturday, February 27, 2021 in Rogers, AR. She graduated from Eastern Illinois University with a Bachelor's Degree in Business, Marketing, and Personnel Management. She went on to receive her Master's Degree in Business Administration from Webster University. After college, her job at Walmart brought her to Bentonville, AR. She was most recently the Senior Supply Chain and Replenishment Manager for NWA Sales and Marketing Group where her coworkers led by David Dozier became extended family members. In 1995, Jean met the love of her life David Henderson through mutual friends. Their love was one for the storybooks. On their first date they took a carriage ride around the square to see the Christmas lights. It was said that when they stepped off the carriage he took her hand and never let go. They were married on October 11, 1997 and raised two spoiled dogs; Niles and Daphne. They travelled the world together and shared their amazing journeys through thousands of photos. Their favorite destination together was North Bend, Washington. After 22 wonderful years together, David preceded her in death on February 13, 2020. Jean was a believer in Christ and was happy to share her love of the Lord with anyone who needed guidance. She was selfless, a great listener, and always there to help pick you up if you were struggling. While attending Fellowship Bible Church, she provided many worship team meals and created an extended family with the members there. Jean was involved in various non-profit organizations and volunteered a lot of her time to programs she was passionate about. She was a volunteer with Souls Harbor NWA and was on their Board of Directors from 2014-2016 and had a role in the Bentonville Bark Park. Jean is survived by two sisters, Janette Lawson of Monticello, IL; Joanne (Alfons) Leonard of Pana, IL; brothers-in-law Dave Lawson of Monticello, IL; Stephen Henderson of Yukon, OK; two nieces, Mary (Steve) Kindermann of Oakley, IL; Kelley (Brian) Evans of Monticello, IL; two nephews, Jeff (Emma) Lawson of Washington, IL; Robert Kindermann, III of Tower Hill, IL; mother and father-in-law Edward and Rebecca Henderson of Yukon, OK; and many great-nieces and great-nephews. Jean was a wonderful wife, daughter, sister, sister-in-law, aunt, and friend. She will be remembered for her warmth and kindness and the love she shared with those she encountered. Arrangements have been entrusted to Nelson Berna Funeral Services, where words of comfort or memories may be shared. Due to pandemic concerns, service will be announced at a later date.

The family of Jean Ann Henderson created this Life Tributes page to make it easy to share your memories.

Send flowers to the Henderson family.