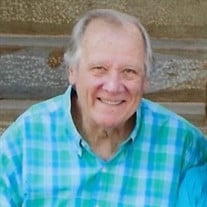 Jeffrey Edward Geisler Sr., age 75, of Fayetteville, died Tuesday, March 9, 2021. He was born December 10, 1945 in Pittsburgh, Pennsylvania, the son of Edward and Anna O’Hare Geisler. Jeff lived the majority of his life in the Philadelphia area. However, around fifteen years ago Arkansas became his much-loved home and he quickly became an avid Razorback fan. Jeff loved coaching youth sports and over the years coached baseball, basketball, and soccer teams. He even enjoyed umpiring baseball games and refereeing basketball games. He loved coaching his own sons when they were young. He was a sports fanatic and enjoyed a lot of the simple things in life like grilling steaks, watching his beloved Philadelphia Eagles play, and being at the beach with family. He was Senior Vice President and Director of Sales for Mac Sports. He was Catholic and served in the Army Reserves. He is survived by his wife, Cathy Geisler; two sons, Jeff Geisler, Jr. and his wife Meg of Greenwich, Connecticut and Michael Geisler of Pittsburgh, Pennsylvania; a stepdaughter, Ginny Perlman and her husband Lee of Denver, Colorado; four grandchildren, Aquinnah and Graham Geisler of Greenwich, Connecticut and Reese and Evie Perlman of Denver, Colorado; a sister, Judith Ward of Fresno, California and a brother, Jon Geisler of Voorhees, New Jersey. A memorial service will be held 2:00 pm, Friday, March 12, 2021 at Moore’s Chapel. Since Jeff never liked to get dressed up, we ask that you dress casually. Memorials may be made to the Glioblastoma Foundation at https://glioblastomafoundation.or/donations

Jeffrey Edward Geisler Sr., age 75, of Fayetteville, died Tuesday, March 9, 2021. He was born December 10, 1945 in Pittsburgh, Pennsylvania, the son of Edward and Anna O&#8217;Hare Geisler. Jeff lived the majority of his life in the Philadelphia... View Obituary & Service Information

The family of Jeffrey Edward Geisler Sr. created this Life Tributes page to make it easy to share your memories.

Send flowers to the Geisler family.