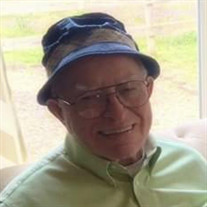 John T. Applegit, 86 of Springdale, AR, passed away Thursday, September 23, 2021. He was born January 20, 1935, in Orange, NJ. He was preceded in death by his father, Howard P. Applegit, mother, Margaret E. Barnes, a brother Charles H. Applegit, and his beloved wife of 61 years Susan. He is survived by three children, Cathy Nechin and husband Ben of Lancaster, SC, John A. Applegit and wife, Terraceina of Taylor’s, SC, Belinda Hodges and husband Dale of Springdale, AR, six grandchildren and eight great grandchildren. He served during the Korean War in the Navy as a Machinery Repairman on the USS Henley, and USS Willard Keith. He was a member of the Roxbury Township Fire Department and Rescue Squad in Roxbury NJ. He worked as a Tool & Die maker until retirement. During his retirement, he continued serving the community as a School Bus Driver and delivering Meals on Wheels with the Springdale Senior Center. He loved camping, fishing, and spending time with his family. There will be a service held 10:30 AM on Wednesday, September 29th at Fayetteville National Cemetery. In lieu of flowers, memorial contributions may be made to the Springdale Senior Center, 203 Park St., Springdale, AR 72764.

The family of John T. Applegit created this Life Tributes page to make it easy to share your memories.

Send flowers to the Applegit family.