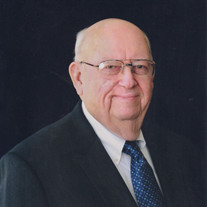 Johnny Luther Maguire, age 90 of Springdale, AR died June 22, 2021 at the Circle of Life Hospice house in Springdale. He was born November 9, 1930 on the family farm at the Strain Community outside Fayetteville, Arkansas, the son of Ernest Everett and Jesse Louella Sexson Maguire. He was preceded in death by his parents, siblings and a son, John Carrol Maguire and grandson Travis Dale Maguire. He is survived by his wife of 70 years Anna Lorene West Maguire, his daughter Kathleen Meier of Tontitown, sons Dale and Marilyn Maguire of Elkins and Brett and Kim Maguire of Springdale, seven grandchildren and eight great grandchildren. He attended school in Elkins, graduating in 1948. In 1948 he joined the US Navy, serving as a radioman on PBM 5 flying boats delivering mail between Korea and Japan. He was discharged in December 1951 and was awarded the Air Medal. He and Lorene were married January 31, 1951. He attended the University of Arkansas earning a BSBA IN 1955. He was admitted to the American Institute of Certified Public Accountants in 1961. From 1961 to 1969 he worked for Askew Enterprises in shopping center development, oilfield services and operating College Club Dairy. From 1970 To 1982 he was CFO of Tyson Foods. After Tyson had a second career operating numerous companies and consulting for many more. He served on many boards over the years. He was a founding member of Trinity Temple now Trinity Fellowship and was a devout Christian whose faith was always foremost in his life and business. He and Lorene traveled the world and his many ventures took him to every continent but Antarctica. John enjoyed golfing, traveling with friends and especially fishing with his best buddy the late Fred Hanna. John gave generously to many causes always saying his tithing would pay him back tenfold. John’s quick wit and sense of humor was remarkable. One of His favorite quips which he attributed to Don Tyson was “When you go to court, the best you can hope to finish is a distant third behind the lawyers.” The family would like to thank the staff at Grand Village Retirement, Scott Berna and the staff at Nelson-Berna Funeral Home. Visitation will be 5:00 pm – 7:00 pm Friday June 25, 2021 at Nelson Berna Funeral Home. Funeral services will be held 10:30 am Saturday June 26th at Trinity Fellowship in Fayetteville. Interment will follow at Fairview Memorial Gardens. In lieu of flowers the family requests memorials be made to Teen Challenge https://teenchallengeusa.org/give/ or Life Source https://www.lifesourceinternational.org/donate To place an online tribute, please visit www.bernafuneralhomes.com

Johnny Luther Maguire, age 90 of Springdale, AR died June 22, 2021 at the Circle of Life Hospice house in Springdale. He was born November 9, 1930 on the family farm at the Strain Community outside Fayetteville, Arkansas, the son of Ernest Everett... View Obituary & Service Information

The family of Johnny Maguire created this Life Tributes page to make it easy to share your memories.

Send flowers to the Maguire family.