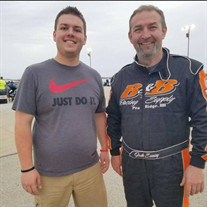 Joshua David Essary, age 46, died on August 23rd, 2021. He was born in Ottumwa, Iowa on February 4th, 1975. He graduated from Cardinal High School in Eldon, Iowa with the class of 1993. He is preceded in death by his grandparents Harley and Lena Essary, grandparents Cliff and Katherine Boyer, and grandmother Shirley Conrad. Josh loved all things dirt track and racing. He began racing at age 16 and has always been the number 4E. He loved baseball beginning in his childhood and continuing throughout life. He was an avid Cubs fan even before they won the world series. He was a seventeen year veteran at the Rogers, Arkansas post office. Josh loved cooking and grilling and smoking food for his friends and family. He loved fishing and hunting with his father. His niece, Peyton, describes him as a constant jokester. Josh was teaching the next generation of racers, his nephew Paxton. He is survived by his wife, Hannah Nichols. A son, Dylan Essary and a step son, Dylan James Nichols. He is also survived by his mother Cindy Essary and step father Dave Essary. His father Tom Essary and step mother Theo Essary. His sister, Cassie (Ryan) Benge and niece and nephew, Peyton and Paxton Benge and many loving friends and family. A celebration of life will be held Friday, September 3rd in Bella Vista, Arkansas Blowing Springs Park, from 4pm-8pm. A celebration of life will also be held in Eldon, Iowa on Sunday, September 5th at the Wapello County Fairgrounds from 2pm-7pm. In lieu of flowers donations can be made to his nephew, Paxton's kart fund to continue Josh's racing legacy, or for a memorial race at the Eldon Raceway. Donations can be mailed to 205 Selma St Eldon Iowa 52554. To place an online tribute, please visit www.bernafuneralhomes.com

Joshua David Essary, age 46, died on August 23rd, 2021. He was born in Ottumwa, Iowa on February 4th, 1975. He graduated from Cardinal High School in Eldon, Iowa with the class of 1993. He is preceded in death by his grandparents Harley and... View Obituary & Service Information

The family of Joshua David Essary created this Life Tributes page to make it easy to share your memories.

Send flowers to the Essary family.