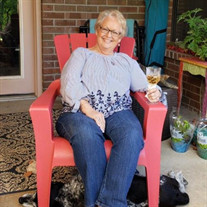 Kaelynne Webb McGill was born on May 14th, 1950, to Gary and Frances Webb in Amarillo, Texas. She developed a hunger for travel and adventure as a result of the family road trips Gary and Fran would take with she and her little sister, Carol. Her parents also shared their faith and love of God with their daughters in everything they did. Kaelynne bravely followed her best friend Sheryl across state lines to Arkadelphia, Arkansas to attend Ouachita Baptist University as a young woman. There, she earned a BA in Education while also earning the title of mom to twin sons, Clay and Brian. Once again, Kaelynne took off on her next big adventure and moved to the suburbs of Houston with her toddler boys. She became active in the singles class at First Baptist Church of Pasadena and met the love of her life, her “favorite fella”, Jim. They were married in the church gardens on June 2, 1978, and welcomed their daughter Amanda the following summer. Kaelynne dedicated 35 years of her life to teaching elementary students and wiped down her final chalkboard at Young Elementary in Pasadena in 2013. Over that time, she and Jim were very active members of First Baptist Church of Pasadena. Kaelynne served as G.A. leader, was active in WMU, served as youth choir sponsor alongside her sister Carol, and attended more church camps than most students did while growing up under her care and leadership. When she wasn’t teaching or on a church trip, Kaelynne would convince Jim to load up the car and head to Dallas or Arkansas so that she could love on her grandchildren. At the behest of her oldest grandson, Cooper, Kaelynne and Jim moved to Northwest Arkansas and settled into their new home in Springdale in May of 2018. Her love of adventure and travel took she and Jim all over the United States and abroad, but she was just as happy taking a day trip out into the country to take pictures of pretty flowers and eat a good meal. Kaelynne loved so boldly and with such passion that her heart needed to rest. On Monday, August 30th at the age of 71, Jesus called her home for her ultimate adventure. She is survived by her husband of 43 years, Jim McGill, her sons, Clay and Brian Carlton, and their wives, Juliana and Jessica, her daughter, Amanda Khanga and son-in-law Melvin, her sister, Carol Jean Carter, her beloved grandchildren Cooper, Chesney, John Clayton and Caroline, her sister-in-law Dana McGill Thompson, nieces and nephews Shawn Thompson, Amber Thompson Adams, Justin Carter, Sarah Carter Kellam and innumerable extended family and friends that she loved so deeply. Viewing and visitation will be held at Nelson Berna Funeral Home in Fayetteville on Thursday, September 2nd from 5-7pm. Memorial Service will be held at the glass chapel at Christian Life Cathedral in Fayetteville on Friday, September 3rd at 12 noon, followed by a graveside prayer and song tribute at Fayetteville National Cemetery at 1:30pm. “Her family takes solace in knowing that Kaelynne is sitting at the feet of Jesus”

Kaelynne Webb McGill was born on May 14th, 1950, to Gary and Frances Webb in Amarillo, Texas. She developed a hunger for travel and adventure as a result of the family road trips Gary and Fran would take with she and her little sister, Carol.... View Obituary & Service Information

The family of Kaelynne Webb McGill created this Life Tributes page to make it easy to share your memories.

Send flowers to the McGill family.