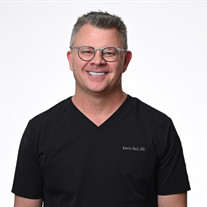 ﻿Kevin Sam Earl 1969-2021 Beloved son, brother, friend, and doctor. Kevin was born in Wray, Colorado, on January 4, 1969, to Bob and Carol Earl. He died at Mercy Hospital in Rogers, Arkansas on Monday, August 30, at age 52. Kevin is survived by his parents, Bob and Carol Earl of Bull Shoals, Arkansas, his brother, Rob Earl and wife Tammy of Warrenton, Virginia, and his seven nieces, the “Earl Girls”. A private viewing was held at Nelson-Berna Funeral Home in Rogers on September 1st. A memorial service for Kevin will be set up at a later date. Kevin served as a medical and surgical doctor from 2001-2021 and was licensed to practice in several states. Kevin lived with intensity, passion, and zeal. Whether playing football as a youth, studying for medical school, making investments, or finding his faith. During Kevin’s later months, he rediscovered his faith in Christ. He had a missionary’s heart. He was not afraid to witness for Christ. Kevin had longed to visit the Holy Land. It was on his “bucket list”. Now, we believe, he dwells in the Eternal Jerusalem, our True Home. Since Kevin loved the Holy Scriptures, in his honor we close with a scripture passage he had underlined in his well-worn Bible: “I can do everything through Him who gives me strength.” (Phil. 4:13)+Amen. All His

The family of Kevin Sam Earl created this Life Tributes page to make it easy to share your memories.

Send flowers to the Earl family.