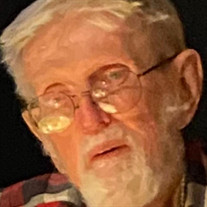 Lloyd Donald Phillips, age 95, of Fayetteville, AR passed away on May 7, 2021. He was born in Colorado City Texas on March 6, 1926. He spent his early years in Greenville, Tx with his beloved mama, Ruth. He fondly remembered her picking cotton in the fields as he “helped” her. At 12 years old he rode a bike 50 miles on the blacktop (highway) to Dallas to live with his grandparents, Bill and Chattie. Lloyd quickly got an education in life as they ran a “cat house”. Which was what a house of prostitution was called back then. Something was said about peering through key holes a lot! He married Evelyn Hendrick at age 17. In 1958 they adopted their son, Doug. Doug passed away in September 2020. Lloyd worked for the Ford Motor Company, mostly in the tractor division for 38 1/2 years before retiring in 1980. He enjoyed retirement for 41 years! Lloyd was of the Greatest Generation. Which was during the time of the Great Depression and World War II era. Although he wasn’t able to serve as he weighed only 113 pounds and therefore wasn’t qualified to be drafted into service. He was a true gentle man. Kind and loving. Always interested in what you had to say. Never did anyone who ever met our sweet Lloyd not fall in love with him! He is survived by his life partner of almost 28 years, Susie Cox, daughter, Kristi McCain, and grandsons, Corey McCain, and wife Reese Roberts, Fayetteville. Zach McCain, Blanchard OK. And his darling great granddaughter, Frankie McCain. His niece, Cindy Quick Dowell, Leesburg, VA. Many dear friends. Also, Phoebe, a really smart little dog who chose to adopt Susie and Lloyd after looking for them for a year! He loved her so. We wish to acknowledge all the wonderful doctors, nurses and staff at Washington Regional Hospice and Misty with Good Shepard Caregivers for taking such good care of Lloyd. At a later date, post pandemic, a gathering will be held at a location to be determined to tell stories and lift a glass to toast the sweetest man in the world, our Lloyd. Cremation arrangements are by Nelson Berna Funeral Home.

Lloyd Donald Phillips, age 95, of Fayetteville, AR passed away on May 7, 2021. He was born in Colorado City Texas on March 6, 1926. He spent his early years in Greenville, Tx with his beloved mama, Ruth. He fondly remembered her picking cotton... View Obituary & Service Information

The family of Lloyd Donald Phillips created this Life Tributes page to make it easy to share your memories.

Send flowers to the Phillips family.