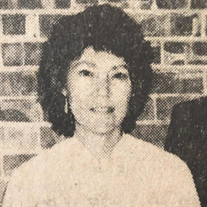 Lois (Ward) Guist, age 86 of Fayetteville, Arkansas died of pancreatic cancer on Sunday, July 11, 2021 at Circle of Life Hospice in Springdale, Arkansas. Lois was born on August 06, 1934, the sixth of eight children to Harve and Atha (Evans) Ward. Lois was married to Sylvester Winfield Guist for 60 years until his death on September 20, 2010. They had three children, Aulois, Charles, and Jim. Lois was an active church member at various Southern Baptist churches throughout her life and served in the capacity of church social hostess for many years. Lois had a distinguished career as a USDA inspector and received an award as USDA employee of the year at a ceremony held in Washington, DC. Lois enjoyed traveling with her family throughout the US - especially the western states. After Lois retired, she became a 'cruise enthusiast'. Lois enjoyed playing Texas Hold 'Em, Pinochle, and other card games, as well as the dominoes game '42'. Lois was a fabulous cook and baker! Family, relatives, and friends enjoyed many fantastic dinners at the Guist home. Lois was a master at hosting 'Catfish Fry' dinners during the summer months. Her cobblers, pies, and apple dumplings were always a big hit. Theotis Brown (former Kansas City Chiefs and Seattle Seahawks football player and dear family friend) loved what he referred to as 'Mom's apple dumplings'. Theotis always looked forward to Lois's visits to Kansas City as apple dumplings or peach cobbler could certainly be counted on during her visits. On March 26, 2014, Lois married William ('Bill') Van Zandt - but retained her last name of 'Guist'. Lois and Bill enjoyed living at Treasure Lake in Branson, Missouri from April through October and, then, residing as 'Winter Texans' in Alamo, Texas from November through March each year. Lois is survived by her daughter, Aulois Johnson (son in law, Laurence) of Leawood, Kansas; son, Jim Guist (daughter in law, Sharon) of Fayetteville, Arkansas; daughter in law, Carol Guist (widow of Lois's son, Charles Guist) of Fayetteville, Arkansas; 10 grandchildren and their spouses; 19 great grandchildren; her second husband, William ('Bill') Van Zandt; and numerous nieces, nephews, cousins, and friends. Lois was preceded in death by her parents, Harve Ward and Atha (Evans) Ward Ash, her first husband, Sylvester Winfield Guist, her son, Sylvester Charles Guist, and her six brothers and one sister. There will be no funeral or memorial service at Lois's request. Lois will be buried beside her first husband, Sylvester Winfield Guist at Mount Comfort Cemetary, Fayetteville, Arkansas. Lois's family would like to thank the staff of Circle of Life Hospice for the wonderful care they provided to Lois. Contributions may be made in memory of Lois Guist to Circle of Life Hospice, 901 Jones Road, Springdale AR 72762.

The family of Lois Ward Guist created this Life Tributes page to make it easy to share your memories.

Send flowers to the Guist family.