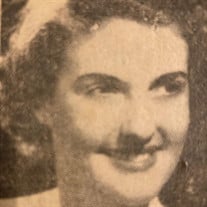 Louise S. Compton, 93, of Fayetteville, AR went to be with her Heavenly Father at Willard Walker Hospice, Monday, June 21st, 2021. Louise is survived by her children, Elaine Teague (Ricky ) of Springdale, AR, Laura Klassen ( Andrew ) of Allen, TX, and Lisa Rice of Rogers, AR. eight grandchildren, Jennifer Clinehens (Chad), Will Teague(Kelsey), Catherine Klassen Molina(Daniel), Emily Klassen, Andrea Klassen, Bridget Mooney(Charlie), and Paul Rice (fiancé, Alyssa Maurer); and six great-grandchildren. She was preceded in death by her husband, Jesse Ernest Compton, Jr., daughter, Kerry Compton, and grandson, Charles Rice . Born in Duluth, Georgia, Louise grew up in Atlanta, Georgia. She attended Mercer University where she was a member of the Chi Omega Sorority, graduating with a Bachelor of Science degree. After marrying Ernest Compton, Jr. she began a career in teaching that lasted 30 years. She was a sponsor of the school drama club for many of those years. She was a dedicated, loving mother with a quick wit and a genuine love for God. A private celebration of her life will be held later. Memorials are preferred to Willard Walker Hospice Home, 325 E. Longview St., Fayetteville, AR, 72703.

The family of Louise Smith Compton created this Life Tributes page to make it easy to share your memories.

Send flowers to the Compton family.