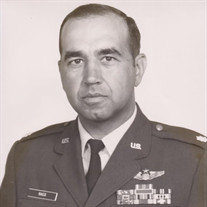 Lt. Col., Dr. John William Rago, Sr., USAF, Retired, age 90, passed away on Wednesday, April 14, 2021, at Willard Walker Hospice in Fayetteville. He was born on November 12, 1930, in Melrose Park, Illinois, to Dr. John B. and Katheryn (Fry) Rago. He is preceded in death by his parents; and his brother, Paul Francis Rago. Dad loved to fly. The Air Force was his avenue to fulfill this need. He spent so many hours in the air and loved every minute (as long as he was driving). He shared his interest in flying with others as a flight instructor for several years, flying all types of planes. His fondest plane and the one he flew the longest was a C-130 Hercules. Flying it first during the Vietnam War and afterwards as a veteran trainer at Little Rock Air Force Base. Dad loved to fish. Spending time in his beloved Boston Whaler or wading catching fish brought him great joy which he passed along to his sons. Fishing trips into the Boundary Water Canoe Area in northern Minnesota were adventure filled traditions he made as a young man with friends and later as a father with his sons. Just when fishing could not have gotten any better than the BWCA, Dad discovered trout fishing in north Arkansas. He was hooked from day one. He loved the beauty and the thrill of fishing on the White river from Beaver dam to the mouth of Northfork river. Dad loved cooking his family’s traditional recipes handed down from his Nonna as well as his Aunt Jo and Aunt Bib. His spaghetti sauce, braciole, and fudge were fan favorites for decades. Dad loved to learn new things. After retiring from the Air Force, he continued his education earning a master’s degree in Psychology and then went on to get his PHD in Counseling He was a licensed counselor for years and helped those who were in need with his dedication to his second career. After retirement from counseling, he found his way to the Osher Lifelong Learning Institute (OLLI) where he took numerous classes and even gave some too. He showed that learning and sharing what you have learned is a gift that keeps on giving. Dad loved his dog, Lucy. She was his constant companion…they spoiled each other rotten. He is survived by his four sons, John Rago, Jr. and wife Nancy of Baraboo, Wisconsin, Paul Rago and wife Karen of Fayetteville, Arkansas, Mark Rago and wife Kara of Dallas, Texas, and James Rago and wife Rebecca of Bennington, Nebraska; nine grandchildren, Angeline Atkins and significant other Johnathan Fragale, Stuart Tribbey and wife Morgan, Stephanie Morgan and husband Jeremy, Eric Rago and wife Mai, Nicholas Rago and wife Angela, Drs. Jessica Crotty and husband Matt, Maria Rago, Chrystina Ellermeyer and husband Will, and Matthew Rago; ten great-grandchildren, Russel, Lawson, Ella, Cameron, Carter, Maddie, Michael, James, Grace Lee and Marlo; and dear friend, Connie Johnson. A visitation will be held from 10:00 – 11:00am with a funeral mass to follow at 11:00am at St. Joseph Catholic Church in Fayetteville. A private family burial will take place at Fayetteville National Cemetery in Fayetteville.