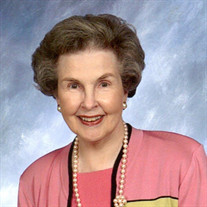 Mary Blackshire Bullock, age 101, died March 28, 2022 in Fayetteville. Ark. Mary was born June 4, 1920, in Searcy, Ark., the daughter of Plaut Leslie and Ella Dickson Blackshire. Mary was a graduate of Bellefonte High School, Bellefonte, Ark., Mary was preceded in death in 1982 by her first husband, Tom Henry Bullock of Boone County, Ark., and in 2001 by her second husband, D. B. Robertson of Bassett, Virginia; and by her five siblings, Jane Blackshire Roberts, James Blackshire, Ruth Blackshire Kinsey, John Blackshire, Sr. and Robert Blackshire. Mary and Tom were married in Bellefonte in 1939 and spent the next sixteen years moving to various locations where Tom worked as a manager for a Chicago construction company, and Mary worked as an administrative assistant. During 1942 and 1943, Tom and Mary were assigned to Whitehorse, Alaska, for work on the construction of the Alaska Highway. Mary was quite comfortable with this assignment as she had heard stories all her life about her parents’ experiences in the Calgary, Canada area where her father worked during 1911-1913 as a civil engineer on construction of the Canadian railway. Following additional work in the states, Tom was assigned to Morocco in 1953, for work on the airfield base outside Casa Blanca. This assignment gave Mary and Tom the opportunity to travel to several European countries and led to the happy adoption of their son, Jason Bullock, in Germany in 1955. Upon returning to the states in 1955, Mary and Tom settled in Martinsville, Virginia, where they had enjoyed the experience of living in the early 1950’s during the construction of the Philpott Dam and Reservoir in Bassett, Virginia. Mary became financial manager of her husband’s electrical contracting and wholesale business established in Martinsville in 1956. While raising their son in Martinsville, they expanded their business in the 1960’s to add electrical supply stores in Harrison and Springdale, Ark. In 1981 they sold the business in all locations for their retirement move to Clearwater, Florida. Very unfortunately, Tom passed away in 1982, on a trip to visit family in Fayetteville. Following Tom’s death, Mary continued to live in Clearwater and travel to visit her family, as well as traveling several times to Europe with her friends. In 1986, Mary and D. B. Robertson of Bassett, Virginia, a good golfing friend to both Tom and Mary, were married in Clearwater. Following their marriage, the couple continued to live in Clearwater during the winter, returning to Bassett in the summers to see D.B.’s family and old friends until D. B.’s death in Florida in 2001. In 2002, Mary moved into Butterfield Trail Village to be close to her two sisters, Jane and Ruth, and her brother, John, all in Fayetteville. Mary is survived by her son, Jason Bullock, Arlington, Virginia, and eight surviving nieces and nephews, as well as numerous grandnieces and grandnephews. Cremation arrangement are under the direction of Moore’s Chapel in Fayetteville, Arkansas. A service for Mary will be held in the Butterfield Trail Village Chapel at 10:00 AM on Wednesday, May 4, 2022. Internment will be at Curlew Hills Memory Gardens, Palm Harbor, Florida. Memorials may be made to the Central United Methodist Church, P.O. Box 1106, Fayetteville, AR 72702. To sign the online guest book, visit www.bernafuneralhomes.com

The family of Mary Blackshire Bullock created this Life Tributes page to make it easy to share your memories.

Send flowers to the Bullock family.