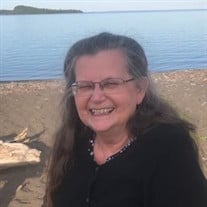 Mary Pauline Chism, age 63 died on January 12, 2022 in Fayetteville, Arkansas. She was a loving wife, dedicated mother, doting grandmother, devoted friend, and excellent teacher, but most of all she was a woman of excellence who drew little... View Obituary & Service Information

The family of Mary Pauline Chism created this Life Tributes page to make it easy to share your memories.

Send flowers to the Chism family.