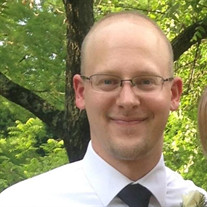 Matthew Ryan Moore, 31, a beloved husband, son, brother, and uncle, went to be with our Lord at 8:40am Saturday August 21, 2021. Ryan was born January 13, 1990 in Springdale, Arkansas and passed away at Washington Regional Medical Center in Fayetteville, Arkansas. His entire family greatly mourns his loss but knows that our God is still good, and He knew the number of Ryan's days on this side of heaven. Ryan received his bachelor’s degree in Information Systems from the University of Arkansas. His passion was mentoring and ministering to youth through many different ministries such as Camp War Eagle, A Level Up, and several church ministries. His other interests included reading, traveling, camping, and combat. Ryan and his wife are members of Trinity Grace Church in Rogers, AR. Ryan married the love of his life, Cassandra Dreyer, on August 24th, 2013. Without question, they were the perfect match for one another. Ryan is survived by his wife, Cassandra Moore of Springdale, AR. Parents Jim and Liz Moore of Springdale, AR. Sister, Lauren Smothers, wife of Mitchell Smothers, and their two daughters Ellie and Brooklyn Smothers of West Fork, AR and sister Madison Moore of Springdale, AR. Cassandra’s parents Jon and Kim Dreyer, brother Paul Dreyer, sister Jessica Carter, her husband Richard, and their two daughters Natasha and Anya. The only viewing will be held from 5-7pm on Friday August 27th, 2021, at Nelson-Berna Funeral Home in Fayetteville, AR. www.bernafuneralhomes.com His place of internment will be at Pinnacle Memorial Gardens in Rogers, AR. Ryan's memorial service will be held at 10:00am on Saturday August 28th, 2021, at Trinity Grace Church in Rogers, AR (5845 S Bellview Road Rogers, AR 72758) In lieu of flowers, donations may be made to https://www.gofundme.com/f/ryan-moore-memorial-fund?utm_source=customer&utm_medium=copy_link_all&utm_campaign=p_cp+share-sheet or Trinity Grace Church https://trinitygrace.org/ A live stream of the service will be featured on the Facebook page of Trinity Grace Church https://www.facebook.com/trinitygracepca The family of Ryan Moore would like to extend their thanks to all of those that poured into Ryan throughout his lifetime.

Matthew Ryan Moore, 31, a beloved husband, son, brother, and uncle, went to be with our Lord at 8:40am Saturday August 21, 2021. Ryan was born January 13, 1990 in Springdale, Arkansas and passed away at Washington Regional Medical Center in... View Obituary & Service Information

The family of Matthew Ryan Moore created this Life Tributes page to make it easy to share your memories.

Send flowers to the Moore family.