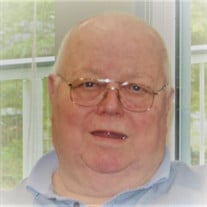 Michael Joseph Dickey, 77, of Rogers, AR, passed away Monday, May 3, 2021 at Circle of Life Legacy House in Bentonville, AR. Michael was born in San Antonio, TX on March 14, 1944 to Lem Edward Dickey and Patsy Ruth McNamee Dickey. As an Air Force child, he grew up in several places including Pineville, LA, Windover, UT, Great Falls, MT, and Abilene, TX where he graduated from St. Joseph Academy in 1962. He served in the Air Force from 1964 to 1968 serving one year in Vietnam. During that time, he married Anna Bell Gabbard on October 29, 1966 and they had three children. He worked 16 years as an air traffic controller ending in 1981. In 1985 he moved his family to Rogers, AR where he lived out the remainder of his life. Besides his family, his greatest passion was learning about God through scripture study and church service. As a member of St. Vincent de Paul he served in many capacities including the St. Vincent de Paul Society, Sacred Heart Enthronement Team, Education Commission, and Eucharistic Ministry. He was an active member of the Give Glory to God prayer group for many years and especially loved participating in the men’s bible study at Patriarch House. He is proceeded in death by his wife of 52 years Anna Bell Gabbard Dickey of Rogers, AR and his father, Lem Dickey of Castroville, Tx. He is survived by his mother Patsy Dickey of Castroville, TX and one sister Linda Holzhaus, husband Dale; three children: Donna Sullivan of Rogers and husband John, Kay Farar of Garfield and husband Marvin, Joseph Dickey of Rogers and wife JoAnn; nine grandchildren: Kyle Dickey and wife Lauren, Shelby Holeman and husband Nathan, John Sullivan IV, Michael Farar, Shannon Sullivan, Jared Dickey, Bryan Sullivan, James Farar, Kevin Farar; 2 great grandchildren: Brooklynn Dickey and Jakob Holeman; and numerous nieces and nephews. A public Funeral Mass will be held Thursday, May 6, 2021 at 12:00PM at St. Vincent de Paul Catholic Church. A private inurnment will be held at Fayetteville National Cemetery. Cremation arrangements have been entrusted in the care of Nelson-Berna Funeral Home of Rogers.

The family of Michael Joseph Dickey created this Life Tributes page to make it easy to share your memories.

Send flowers to the Dickey family.