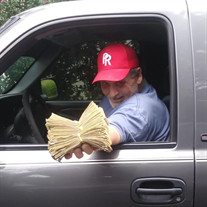 Michael Joe Shelley, age 56, passed away Friday, April 30, 2021 in Bentonville, Arkansas. He was born November 27, 1965 in Monett, Missouri to Larry and Jane (Quick) Shelley. He is preceded is death by his parents Larry Shelley and Jane Coffey, his loving wife Janice Sue Shelley, and his uncle, Dave Quick , and maternal grandparents Ralph and Etries Quick. Michael was a true craftsman and could build anything with his hands. He worked as a master carpenter during his working life. He loved to spend his spare time outside, whether it was working on cars and dirt bikes or hunting. His greatest joy was being a grandfather later in life and loved to watch his grandboys play sports whether it be football or baseball. He enjoyed spending time with his family telling old stories or sharing his wisdom. He was very close to all of his grandchildren , and his legacy will live through the stories they tell in life. He was a tough guy with a secret big heart. He was a devoted husband, father, grandfather, and friend. He is survived by his son; Kendall Shelly and partner Sarah Geiss of Pea Ridge, step-daughter; Lacey Dootson and husband Travis of Bella Vista, step-son; Travis Whillhite of Corpus Christi, Texas, grandchildren; Kemper Shelley, Kaden Shelley, Kinley Shelley, Rylee Quick, Layton DeShields, JayLee Randolph, and Kasyn Dootson, his sister Marci Higby and husband Chris ,of Highlands Ranch, Colorado, and nieces and nephews Sydney, Aiden, Carver, and Fynley Higbee, Aunts and Uncles , Bonnie Magness of Portland, Washington , Barbara Sue Hollands of California, Dale Quick of Baton Rouge, Louisiana, and Rick Quick of Missouri, and the mother of his son; Georgina White who stood by him as a friend always. Cremation arrangements have been entrusted under the direction of Nelson-Berna Funeral Home of Rogers. To place an online tribute, please visit www.bernafuneralhomes.com

Michael Joe Shelley, age 56, passed away Friday, April 30, 2021 in Bentonville, Arkansas. He was born November 27, 1965 in Monett, Missouri to Larry and Jane (Quick) Shelley. He is preceded is death by his parents Larry Shelley and Jane Coffey,... View Obituary & Service Information

The family of Michael Joe Shelley created this Life Tributes page to make it easy to share your memories.

Send flowers to the Shelley family.