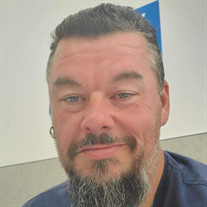 Myron “Tiny” Williams, age 46, of Rogers, Arkansas, passed away on December 27, 2021, at Washington Regional Medical Center in Fayetteville, Arkansas. He was born on January 30, 1975, in Harris County, Texas. Tiny served in the United States Army as an Army Ranger. He owned and operated LTC Williams in Rogers. Tiny was a member of the Masonic Lodge. He was well known for being a good friend who was always willing to go out of his way to help anyone. He was preceded in death by his father, Bobby Phillips. He is survived by his children, Brianna Williams and husband Eric Jacobs of Farmington, MO, Cadence Williams of Gordonsville, TN, Rodney Conner of Shawnee, OK, Chantail Broudrick of Shawnee, OK, Amie Conner and husband Junior Calderon of Del City, OK and Courtney Sturm of Springdale, AR; and his grandchildren, Ian Calderon, Alissa Broudrick, Ziva Frisbey, Dixie Harris, Zaylyn Conner and Eliott Ralph. He is also survived by many other extended family and friends. The family will hold a private celebration of life.

The family of Myron "Tiny" Earl Williams created this Life Tributes page to make it easy to share your memories.

Send flowers to the Williams family.