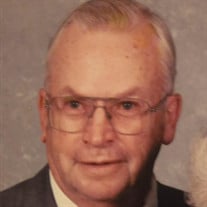 Orland Devere Peterson, age 93, of Fayetteville, Arkansas, died on October 13, 2021, at Katherine’s Place at Wedington. He was born on August 15, 1928, in Ledyard, Iowa to William Peterson and Sarah (Bishop) Peterson. Orland married Arden Packer on May 2, 1952, in Central City, Iowa. He served in the United States Navy during the Korean War. Orland spent his life in Iowa farming the family homestead, raising livestock, and carpentering during the long winters. He served as County Supervisor in the 1980’s. Orland and Arden moved to Fayetteville in 1989, where he continued to be productive as a carpenter and handyman for many years. Orland had a “Get er done” attitude in life, procrastination wasn’t in his vocabulary. For him, helping others was more important than money. Orland enjoyed hunting, fishing, and golfing up until the end. He was preceded in death by his parents, William and Sarah Peterson; son, Glenn Peterson; sisters, Evalynne Milne, Wylma Buckles, Ivy Burtis, and Geneva Platt; and brother, Bill Peterson. Orland is survived by his wife of 69 years, Arden; sons, Scott Peterson and wife Pam of West Fork, Arkansas, and Curt Peterson and wife Donna of Las Vegas, Nevada; daughter, Gail Figg and husband Randy of South Bend, Indiana; daughter-in-law, Linda Peterson of Tyler Texas; seven grandchildren, four great grandchildren, sisters, Phyllis Wineman, Lois Ankeny, and Ramona Chamberlain; and many friends from both Iowa and Arkansas. There will be a gathering for family and friends from 2:00 p.m. to 4:00 p.m., Tuesday, October 19, 2021, at Nelson-Berna Funeral Home in Fayetteville. In lieu of flowers, donations may be made to the American Cancer Society at donate3.cancer.org/ .

The family of Orland Devere Peterson created this Life Tributes page to make it easy to share your memories.

Send flowers to the Peterson family.